Recently I was asked to present a program about park history. History… I love it and I love to dig through the vintage park photos. So for me this wasn’t work at all but fun. 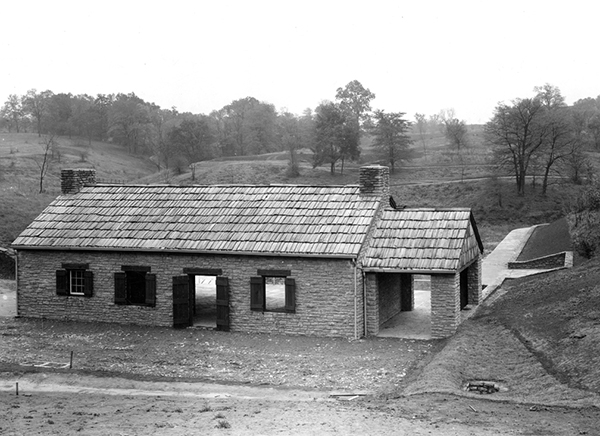 Lakeside Lodge at Sharon Woods, circa 1936

For this presentation, I wanted to get some really good vintage photos, some that might not have seen the light of day for a while. I pulled out the dusty bins and started go through the folders of pictures. Many of them I had seen, many were familiar sights and many sparked memories. For you see I had the privilege of growing up in a park family. My father worked and retired from the Operations Department. (“In My Father’s Footsteps”, Aug 8, 2014) Because of this, my historical park knowledge extends well beyond my almost 20 years of park employment.

All the digging paid off. I found many I could use for my presentation, but I also struck gold. Well, at least for me. Because among the park district’s photos, I found one of myself and two of my siblings from around 1963! 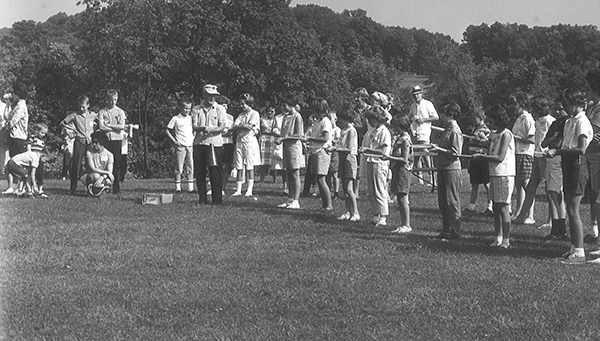 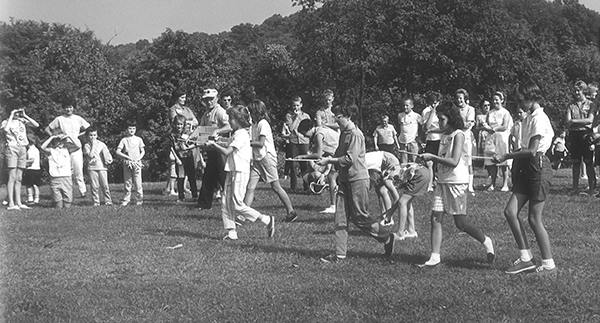 In times past, there was a big park employee picnic every year that was held on a Thursday evening in August at the Lakeside Lodge in Sharon Woods. Daddy would take off a little early to come home to get the rest of the family. (Believe me, it was the longest waiting ever when you are an excited kid.)

When we would arrive at Lakeside, Mom would always warn us to not run too fast down the tree lined hillside. However excitement always took over, and we would race to see who could reach the bottom first. Being the youngest, it was never me.

The day was all planned out just right. There was boat riding on the Sharon Queen, a nice meal, bingo for the adults and a refreshment stand. Ah, the refreshment stand. It was always filled with ice cream, pop, snow cones and candy bars – and I mean the real-sized candy bars. Of course, we would have what is now called a “sugar high” before the dinner was served, but there was always the Game Master to ensure that you ran it off. 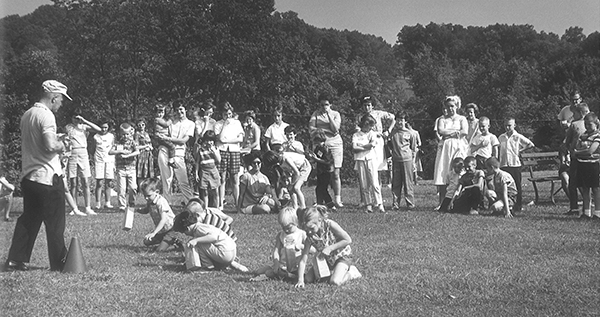 I do not believe we ever knew his name, other than Game Master. He would pull up in a station wagon loaded down with games and prizes. With his megaphone in hand, he would call out ages to line up for a game. Oh how nervous we would be to find out what game he had in store for us.

In the pictures I found of those games, I am about 5 or 6-years-old with blonde pigtails picking up candy off of the ground. I wasn’t even sure it was me until I got a magnifying glass. Then I saw my sister Linda in the background behind me. Then in two other pictures taken on the same day, both my brother Stan and Linda are there. Stan is standing like most teenagers would, with his arms crossed looking disinterested in the kiddie games.

Those days growing up were special and fun, creating memories that will stick with me forever. I would not change them for anything, and it meant so much to me to find my family tucked in among the park district’s past.