This past Labor Day weekend the fish were really biting at Lake Isabella. The weekend kicked off on Friday when we stocked 800 lbs of adult channel catfish. Then with all the rain we got on Friday and Saturday, the water temperature started to fluctuate, which stirred up the fish and made them active on Sunday and Monday. The shovelhead and blue catfish were really biting on Sunday, and we weighed in several fish that were more than 25 lbs here at Lake Isabella. But none of the fish were as impressive as the fish that almost got away.

It all began at 5:30 p.m., when angler Eric Paugh came back into the boathouse from fishing out on a boat. He told me that he was getting some really good bites and that he just hooked into a big one that snapped his pole, broke his line and took the hook and floater, too. Eric got a new rod and hurried out the door to get back on the water. Seconds later I get a call that there is a boat with a big fish rowing back to shore and that we should get the scale ready. So I grab the scale to meet Chris Sheldon out by the boats. As I am walking closer to Chris’ boat, I see Eric point and exclaim, “That’s my float!”

Chris then explains to me that he and Eric were both fishing in boats about 10 to 15 feet apart. After Eric rowed back in to replace his broken rod, Chris saw a float pop back out of the water. Chris rowed over to the rogue float to retrieve it for his buddy, but quickly realized there was something still on the other end. He quickly grabbed a rag to prevent the fishing line from cutting up his hand and then hand-lined the fish, netted it, got it into his boat and rowed his way back to the boathouse. 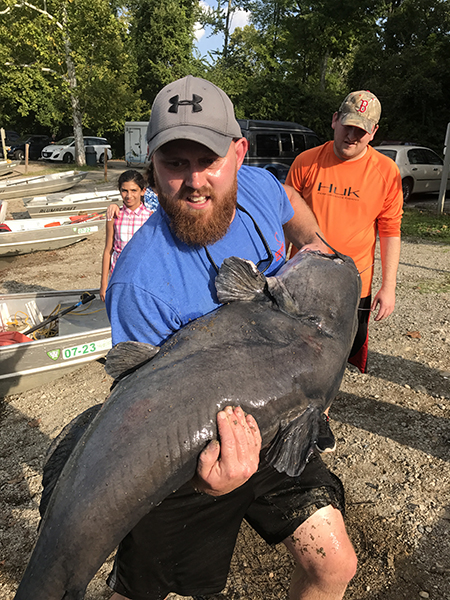 Chris Sheldon (in blue), Eric Paugh (in orange) and their 72.8 lb blue catfish

By this time Chris, Eric and I had quite a few spectators around the boats, and a lot of pictures were taken. It was time to weigh the monster catfish and get him back into the lake. This blue catfish tipped the scale at 72.8 lbs!

Monday, September 4, was just as exciting. Mark Davis came bright and early with his daughter, Rylynn, to test their luck, too. By 10 a.m., they had two decent shovelhead catfish worth putting on the scale, one weighing 27 lbs and the other weighing 32.8 lbs. 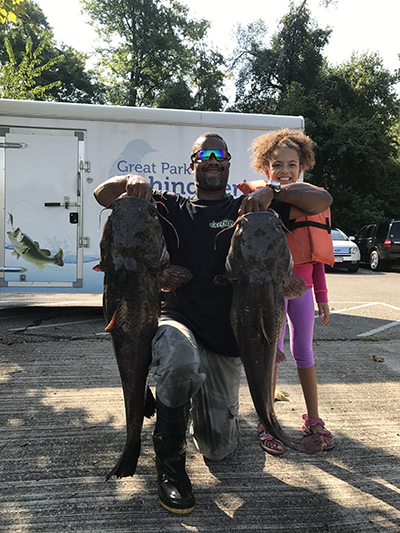 Mark Davis and daughter Rylnn with their two shovelhead catfish

Monday was also the sixth and final Kids’ Mystery Fish Challenge of the 2017 season. A wide variety of fish were caught that day, including bluegill, crappie, perch and channel catfish. More than 120 kids participated, which brought the grand total to more than 600 kids who took part in this year’s events. We can’t give enough thanks to our sponsors, Bass Pro Shops and Hamilton Bait & Tackle, because without them these events wouldn’t be nearly as great for the kids. 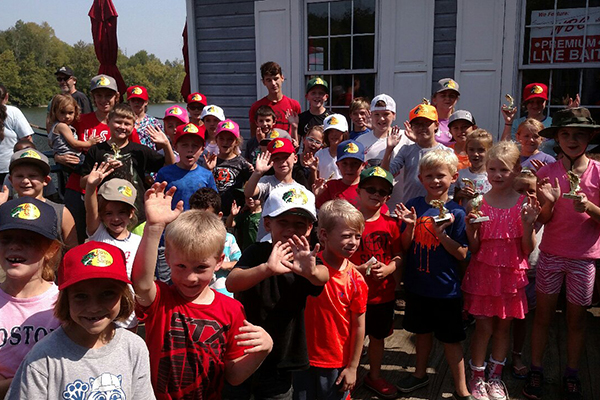 Participants of the final Kids Mystery Fish Challenge of 2017