“During all these years there existed within me a tendency to follow Nature in her walks.”

For anyone who has visited the Miami Whitewater Forest visitor center in the past 25 years, a familiar, and sometimes unsettling, face has been there to greet them. The animatronic figure of John James Audubon has been an undeniable staple in the center, both delighting and intriguing visitors young and old. Some approached him with enthusiasm, hardly being able to wait to press one of his buttons to hear him express his pre-recorded knowledge on the park district, the Ohio valley or nature itself. Others approached with trepidation, or not at all, due to his incredible (but not quite right) life-like appearance. “Is that guy real, Dad?” was a common question to hear on any day visitors were present. 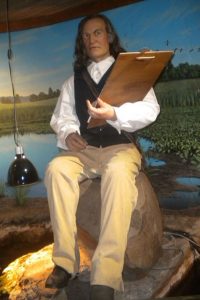 John James Audubon, indeed a real person, was an American ornithologist, artist and naturalist known for his studies, drawings and paintings of North American birds. Born in what is now Haiti in 1785, Audubon came to America in 1803 when he was just 18 years old to avoid being conscripted into the Emperor Napoleon’s army. During his lifetime he traveled the country, studying and drawing birds in their natural habitats and declaring his intention to paint every bird in North America. His works were sometimes controversial, as they showed birds exhibiting some undesirable (but natural) behaviors, such as attacking other birds’ eggs or stealing food from one another. His methods too were sometimes frowned upon, as he often shot the birds in order to pose them for his paintings. 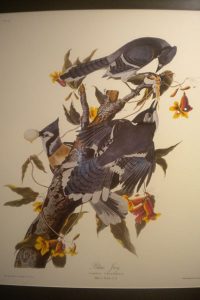 A John James Audubon animatronic statue was displayed at Miami Whitewater Forest until spring 2018. This is a page from one of his books. 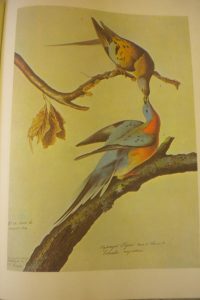 A John James Audubon animatronic statue was displayed at Miami Whitewater Forest until spring 2018. This is a page from one of his books.

His definitive work “The Birds of America” was published in London between the years 1827 and 1839. This 435-plate collection taught the world much of what it knows today about the some-700 species recorded therein, including six now-extinct species. Perhaps more importantly, it has inspired appreciation of and excitement to learn more about these fascinating creatures in countless individuals throughout the years, including myself. 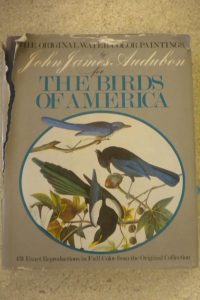 A John James Audubon animatronic statue was displayed at Miami Whitewater Forest until spring 2018. This is one of his books.

The recent park district-wide reorganization has afforded us the opportunity to reevaluate many of our offerings and to find new ways to help our visitors make lasting connections to the natural world. Visitors to Miami Whitewater Forest this season will quickly notice that John James Audubon is no longer with us. Although many staff and visitors are sad to see him go, we must realize that like all things in the natural world, the only thing certain is change. Perhaps no one would have understood this better this John James Audubon himself.