It was snowing at Miami Whitewater Forest Lake three days before the first Bass Series Tournament on Saturday, April 21. It was only 32 degrees when 64 bass anglers launched their boats. Toss in cold and off-colored water, and you have very difficult fishing conditions.

Most of the field, no doubt, expected the bite to be slow. The lures that would trigger bites were no secret, and at one point or another, every angler tossed a jig and a ChatterBait. However, as in most tournaments, the top three teams simply did it better on this cold spring day.

Julio Delgado and Paul Regensberger won the contest with three bass that totaled 12.17 lbs. They caught them on a black and blue jig. 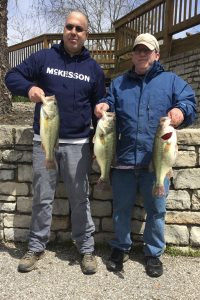 Matt and Steve Wheeler finished second with four bass that weighed 10.46 lbs. Matt also caught the biggest fish of the day, tipping the scales at 5.69 lbs. He caught it on a ChatterBait and won a gift card to Hamilton Bait & Tackle for the Big Bass Award. 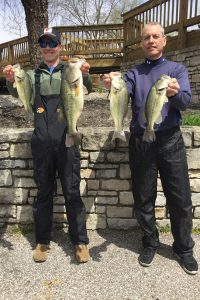 Mike and Brent Jones also brought four keepers to the scales and finished third with 9.31 lbs. They caught them on jigs.

The top three teams were awarded plaques and more than $1,600 in Great Parks gift cards. 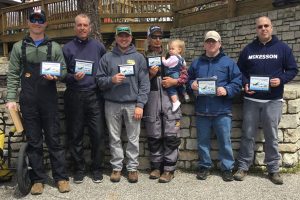 The top three teams at the Great Parks of Hamilton County’s first Bass Series Tournament of 2018.

There were a total of 18 teams that brought fish to the scales. There were 94.48 lbs of bass weighed in. Lures that were mentioned the most were jigs, ChatterBaits and square bill crankbaits.

The next Bass Series Tournament will be at Miami Whitewater Forest Lake on May 6. Entry fee is $70 per team, which includes the boat rental. The water will warm up by then and fishing success should be a lot better.