Recently I was witness to a ruby-throated hummingbird’s (Archilochus colubris) seemingly miraculous recovery from an onslaught of attacks from another territorial hummer. When I came upon the tiny feathered creature it was laying in the grass with its head down. It was hard to know whether it was going to make it. I, on the other hand, found it hard just to sit back and do nothing. The hummers had been dueling with each other, vying for a chance to get a sip of sugar water from a feeder.

For at least 30 minutes I sat five feet away on the ground watching the little body heaving in and out with rapid breaths, the only sign of life. I did not have much hope of its total recovery, as I believe I may have seen the same little fella in the morning on the ground also below the bird feeders. For me, it was a confusion of the feeders providing food and also creating a battleground, making me question the value of the feeders when so much trauma resulted.

As time passed, I pondered the little marvel. How can something no longer than 3 ¾ inches be a bird? As I sat on the ground, several others sped by, attempting to eat at the two feeders. They seemed ruthless, if something almost weightless can be called such. I was surprised by the dark black colored throat visible at one angle and then dramatically flashing shimmering magenta of the most regal kind at another angle. The perfection of color used to warn or attract. 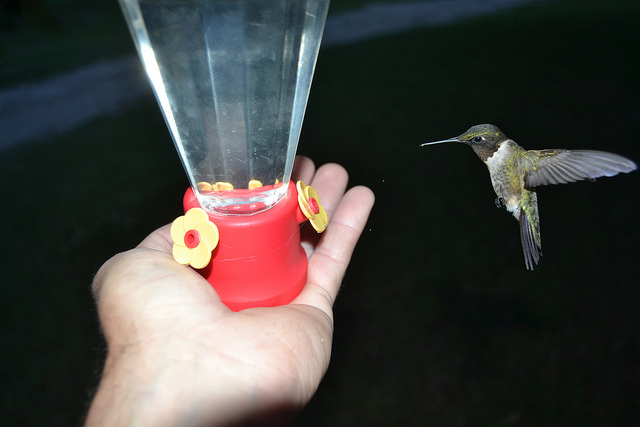 A ruby throated hummingbird next to a human hand. Via Frank Boston on Flickr: http://bit.ly/2Fx6Yp1

Finally, after what seemed like hours (it had only been 45 minutes), the bird lifted its head from the grass blades and blinked its eyes. As if it was too much, the bird again laid its head back down, appearing to be stunned or exhausted or both.

There I sat, as if a sentry to keep the other hummers from attacking so vulnerable a creature. Being green was to its advantage for recovery, nestled in the new grass of spring camouflaged as if invisible.

Thinking back to what I understood about hummingbirds, it came to me perhaps some food from the feeder would be helpful. Believe it or not, these little fellas can consume 50 percent of their body weight in sugar each day. Could I pick up this frightened and injured being? I can try, and try I did. I brought the feeder to the ground near the prostrate bird. Carefully looking over the top of my bifocals to be able to focus on my task, barely feeling the feathers, I gingerly moved it. To my surprise, no struggle followed. Inside I was shouting, “Oh my goodness, I am holding a living hummingbird and it is not trying to get away.”

Really more than likely it could not fly due to weakness from not eating. I moved its long straw-like beak into the feeding hole. The beak was positioned so if the bird was going to drink it could — and drink it did. It seemed a long grateful drink perked the little fella up enough for it to leave my hands and flop a bit in the grass. And within moments it was airborne, albeit awkward, but good enough to ascent to the trees to safety. I was left thinking, did that really happen? I think I was witness to a miracle.

Nature shares many miracles. Come to one of our 21 parks and preserves and experience a miracle of your own.