Three in a Row for Miller & Fillers

The third Sharon Woods Bass League Tournament of 2016 was on May 4. The fishing proved to be much better this time, as six of the teams brought a combined 43.08 lbs. of bass to the scales!

Steve and Matt Wheeler won the tournament with a five-bass limit that totaled 10.92 lbs. The team that catches the biggest bass wins a Hamilton Bait & Tackle $25 gift card, and for the third consecutive week Elvis Miller and Larry Fillers claimed that prize! They had the biggest bass, which tipped the scales at 3.68 lbs! Once again, we are seeing why Sharon Woods Lake is considered one of the top bass fisheries in southwest Ohio.

If you would like to test your skills on this fun little lake, join us for the Great Parks Bass Series Tournament on May 14. It should be a huge weigh-in, and I expect every team to bring fish to the scales. 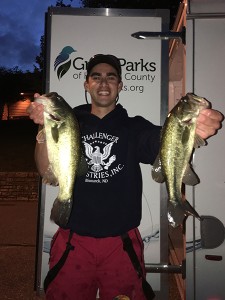 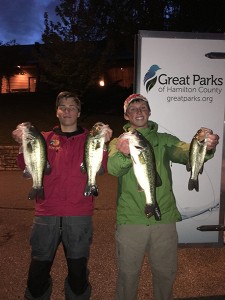