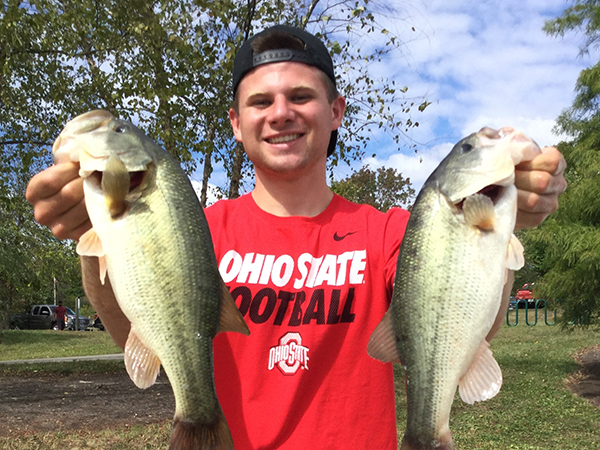 September 26 and 27, 2015, marked the end of this season’s Bass Series tournament. Only the top 20 anglers in the point standings from the year were invited to fish for their shot at the championship and the grand prize of $1,000 to Bass Pro Shops. With the amount of skilled anglers who competed in the Bass Series this year, just making it to the tournament was an honor. And there were plenty of well-qualified anglers who didn’t make the list.

The first day of the championship was held at Sharon Woods’ lake on Saturday. Many five-fish limits were caught, including Brian McLucas and Brad Whitaker, who caught the biggest bag of the day weighing 10.28 pounds! They also had the biggest bass of the tournament that tipped the scales at 4.17 pounds. After day one, many teams were still within reach of the grand prize, including Jody Andrezewski and Ben Quizno who were “Anglers of the Year” for the 2015 Bass Series. Seventeen-year-old Cole Wessner from Colerain fished by himself, but he was also still in the running for the grand prize, ending the first day with 7.66 pounds. Cole used a Shaky head and a Texas rig to catch his fish at Sharon Woods.

The second day at Winton Woods’ lake was much more challenging. Anglers who usually fish very well zeroed, including our “Anglers of the Year.” However, it wasn’t tough on Cole — he caught the biggest bag of the two-day tournament weighing 10.74 pounds! This was enough for first place, and Cole was named the champion! Cole’s two-day total was 18.40 pounds, and he used soft plastics around fallen trees to catch his limit at Winton Woods Lake. Brian Short and Mike Hoefker split almost $500 in prize certificates for finishing in second place with 15.31 pounds. Jamie Rains and Craig Stephany split around $300 in prize certificates for finishing in third place with 14.98 pounds. The biggest bass at Winton Woods Lake was caught by Matt Wheeler, weighing 3.07 pounds.

Congratulations to all anglers on a great season and hats off to our 2015 champion, Cole Wessner!