The Empty Chair: A Tribute to “The Butter Lady” 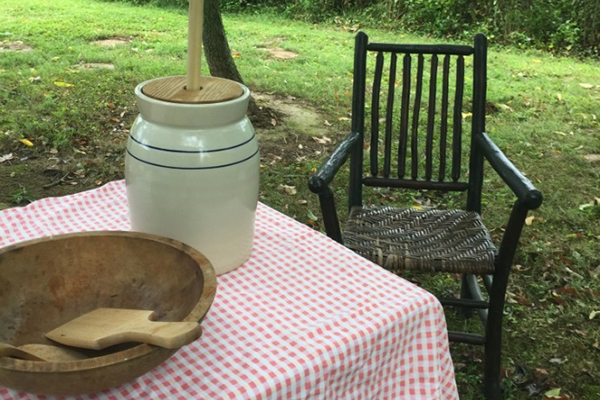 She was known for years at Great Parks’ annual Weekend in 1800s event as “the butter lady.” Sitting in the big chair made of walnut wood, she would butter crackers for guests with her fresh-churned butter. With each tasty cracker she passed out, she would share a smile along with a story. Many guests would linger just to talk with her a little longer, because she had a gift of being able to verbally transport people back in time with her vivid childhood memories. She looked so authentic in her pioneer dress that many visitors would ask to have their picture taken with her. But she wasn’t just the park volunteer in pioneer garb who looked like she just stepped out of the pages of a Little House on the Prairie book. She was much more than that. Mary Helen Lovins was also my mom. 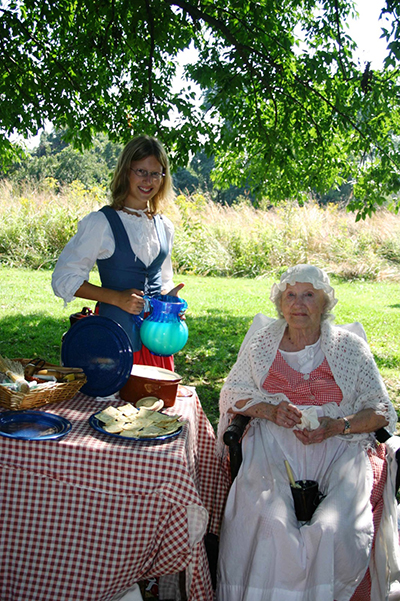 Born in Corbin, Kentucky, in 1922, Helen Hubbard she was the oldest daughter of 10 children, which included two older brothers, two younger brothers and five little sisters. In 1926, just before the start of the Great Depression, her family crossed the Ohio River so her dad could find work. He worked for $1 a day on the railroad, the same railroad that ran through Glendale at the time. It was then that they moved into one of the tenement houses off of Springfield Pike in Woodlawn. (This same property would one day become part of Glenwood Gardens!) The family rented a small clapboard house there, which they called “the house across the creek.” It might have been her childhood memory of the swinging bridge spanning the Mill Creek that later inspired the swinging bridge in Highfield Discovery Garden. Helen had many memories of that cherished place, and one she shared with the folks at Weekend in 1800s was getting her ankle caught by a cow’s tether and being dragged all the way to the creek so the cow could get a drink on a hot summer day. Or her recollection of “wild onion whipped cream,” resulting from the cow getting into a wild onion patch. 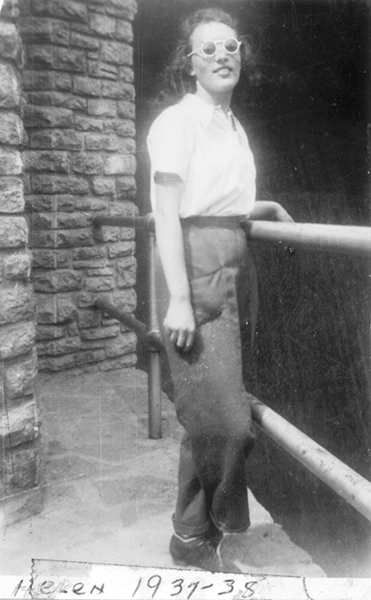 In 1937, her family moved to Sharonville on Wyscraver Road just above Sharon Woods. Helen would often tell of trips to the park with her school, family or friends. It was there that she met and married another Kentuckian who also lived in Sharonville by the name of Vernon Lovins. They were married in 1941 before Vernon was drafted into the Army and spent four years overseas during World War II. After the war, in 1946, Vernon started working for the then-named Hamilton County Park District. Three years later, he moved his growing family to a small home on Strimple Road just outside of Harrison, Ohio. Helen and Vernon raised seven children on that property in the Miami Whitewater Forest area. Vernon continued to work in the Operations Crew, spending more than 30 years with the park district before he and Helen retired to a little place in Okeana, Ohio. 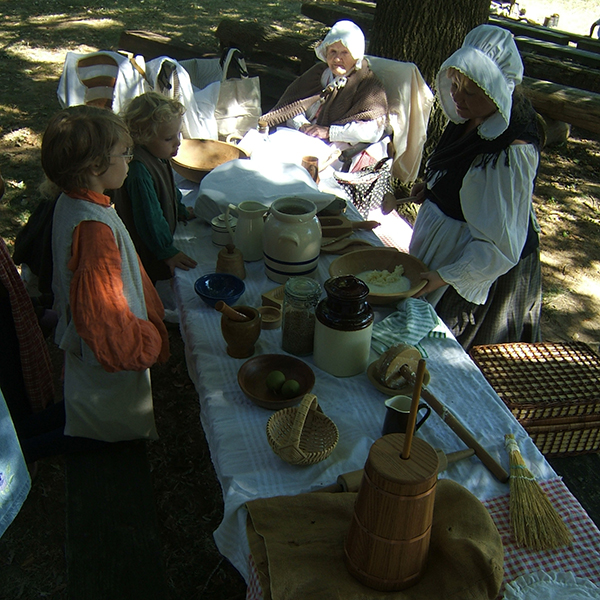 My father Vernon passed away in 1996, and sadly we lost Mom last year on September 26, 2014, at the age of 92. She was a special lady who loved her family, sewing, puzzles and quilting. Some of her hand-stitched quilts have been used in programs at Winton Woods, Sharon Woods and Farbach-Werner Nature Preserve.

Helen was missed very much at this year’s Weekend in 1800s, especially by her butter-churning daughter. But her memory will not be forgotten, and the butter churning will be carried on by Helen’s great-granddaughters, Olivia, Alexis and Tabitha, who joined the tradition this year. Our family is now making new memories, connecting a new generation to the park district. 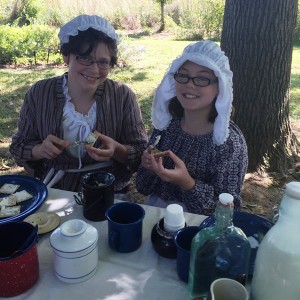 Olivia and Alexis continue the tradition 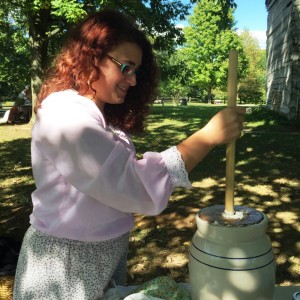 This connection is especially appropriate this year as the park district celebrates its 85th birthday. That’s 85 years of bringing families and friends together with the beauty and fun of the great outdoors. And that’s a lot of stories like mine about traditions and memories made in the parks.