A Chink in the Armor 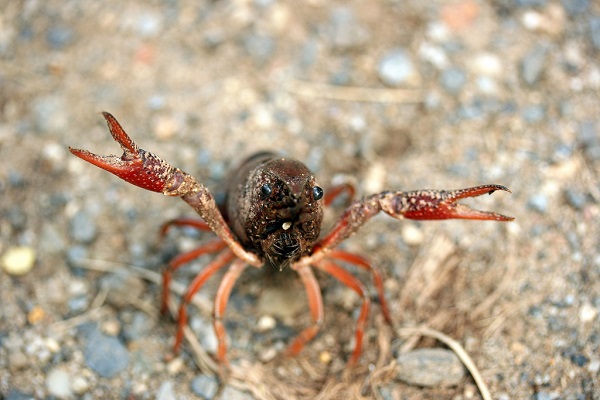 Whether you call them crawfish, crawdads, mudbugs or by their slightly more formal name of crayfish, “freshwater lobsters” illicit some sort of visceral response. Fear is one I often see when I show visitors how to catch crayfish. This reaction makes sense.

For one, crayfish look formidable – they’re a virtual underwater tank. Their hard exoskeleton “shell” acts as armor. Their antennae wave around a bit like radar, checking for safety. Even if you have never been snapped by one, their pincers just look like they could slice off your finger. And even if they happen to lose one of those pincers, it will grow back!

Crayfish even behave defensively. Go after one, and they turn to face you. Keep getting closer, and they back up as you get nearer. Try to catch one, and it darts under a rock. This behavior is so common that the term “crawfish” means to back out of a deal or situation. 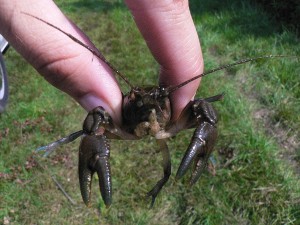 Despite all their defenses, there lies a chink in the armor—an Achilles heel if you will. The weakness is not in the exoskeleton per se, but rather a weakness in how their exoskeleton grows. You see, just like our skeleton, a crayfish skeleton needs calcium in order to maintain its armor. Calcium can be a hard mineral to come by in certain waters, so a crayfish solves this problem by removing calcium from its exoskeleton. It then collects the calcium inside its stomach into what is called a gastrolith. A gastrolith is hard like a rock, and it is shaped a bit like the head of a mushroom. Once the crayfish sheds its old exoskeleton, the gastrolith gets reabsorbed and is used to harden the newly formed shell. It is in this time of shedding, referred to as ecdysis, that the crayfish is vulnerable to attack.

And there is one animal that eats almost exclusively the soft, freshly molted crayfish: the queensnake (Regina septemvittata). This snake is a slender, almost unassuming snake. They don’t grow very large – only about two feet long. As young, they have seven yellow stripes running down their belly (three on the back and four on the belly). However, as they grow older, the snakes turn more of a brown color and resembles a garter snake. The females, like growing crayfish, also harbor a secret. A female will carry the eggs of her young inside her body, and then give birth to them after they have developed. Not surprisingly, they are great swimmers and can even smell their prey underwater. 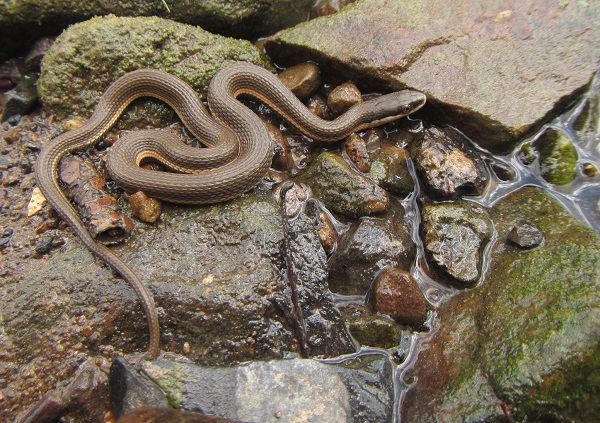 The queensnake’s search for food relies on timing. If they find a crayfish that is not molting, the pincers will of the crayfish will be sufficiently hardened and it be able to protect itself.