Lake Isabella hosted its third tournament of the year: the new Rod Busting Tournament. Six teams tested their luck against some of the biggest catfish in any of Great Parks’ lakes. Not even two weeks prior to the tournament, Lake Isabella was stocked with 350 pounds of shovelhead and blue catfish, with the biggest one tipping the scale at a whopping 52-pounds!

First Place
Ben and Joel Hackney weighed in five channel catfish but their biggest fish was a 7.97-pound carp. They won $84 in Great Parks’ prize certificates and first place plaques. 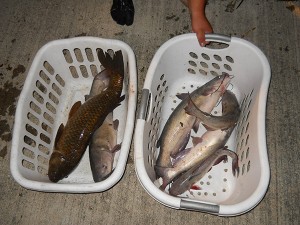 Second Place
Mark Davis and Brian Watters only had one fish weighing in at 9.65 pounds, but it was enough to claim second and biggest fish of the night. They won $60 in Great Parks’ prize certificates and second place plaques. Mark also received a $25 Bass Pro gift card for the biggest fish. 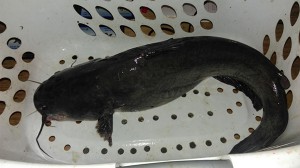 Third Place
Jerald Knippenberg was fishing alone during the tournament, but that didn’t stop him from being able to pull in six nice channel catfish. The total weight of his six fish came out to be 8.51 pounds, earning him $36 in Great Parks’ prize certificates and a third place plaque.

The next tournament at Lake Isabella, the Reel Screaming Tournament, will be held on Sunday, September 20 from 6 a.m. to noon. If two months from now is too long for you to wait, you can always stop by any day of the week and enter the Colossal Fish Contest. Last week’s winner, Noah Able, won $67.20 in Great Parks’ prize certificates for his 15-pound blue catfish.