I had first come to admire gulls when I was younger during a short visit to Cedar Point, just off the coast of Lake Erie. The gulls were everywhere! They would follow you for food, and my brother and I soon discovered that they were especially adept at snapping our tossed up snack crackers out of mid-air (a practice that I now actively denounce!).

Although my brother and I gave our food willingly, one might even consider gulls thieves. As a matter of fact, gulls are known to practice kleptoparasitism, which means they steal food from other animals that have found, killed or otherwise gathered food. In some cases, coastal gulls are known to tear the flesh off whales when they surface for air.

I have had a few visitors at Miami Whitewater Forest surprised to see gulls hanging out by the lake these last few months. “Why are they here?” becomes the question posed by many. Like most people, I usually associate gulls with summertime at the beach. This association makes it easy for nature lovers and visitors to be surprised when they see gulls during winter. You were probably taught in school that birds travel south for winter. But sometimes people forget that we are, in fact, south for a few varieties of birds. While scavenging nearby parking lots, garbage dumps and lakes, the gulls are able to get all the resources they need to survive the winter. These days, I see them as little acrobats that brighten up the winter doldrums.

So as winter-like weather is giving its lasts gasps, be sure to get out and take a look at two kinds of our visiting gulls: ring-billed gulls and herring gulls. Ring-billed gulls, like their name suggests, have a black band encircling the tip of their bills. Herring gulls have a red spot on their lower bills near the tip. Let them also remind you of the winter that is forgone and the excitement of the warmer weather to come. Just be sure to leave the crackers at home. 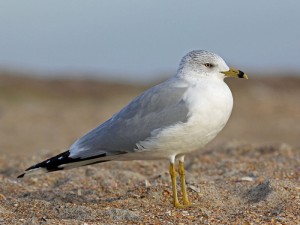 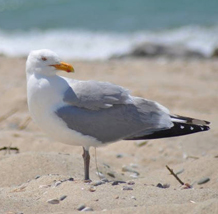