March came in like a lion, and ended about the same way. On March 31, Miami Whitewater Forest Lake was 10 inches above normal pool and surface temperatures were only 44 degrees. In fish talk…that is still really cold.

However, there is hope on the horizon. April is traditionally one of the best months to fish southwest Ohio. That holds true for all species. As the water warms to 50 degrees, fish make a very deliberate move shallow in preparation of spawning. If you want to catch a big, trophy fish, then get on the water this month! The giant blue and shovelhead catfish feed aggressively. They will chase panfish and gizzard shad into a foot of water, so try using live bluegill or goldfish. If crappie is your favorite, watch for the dogwood trees to bloom – it is a sure sign that the biggest crappie in the lake are shallow and catchable. Throw chase baits for bass and shallow running crankbaits will work well at Winton Woods and Miami Whitewater Forest.

On Saturday, March 30, 18 anglers competed in our second Panfish Cup Series tournament at Miami Whitewater Forest lake. They were greeted with a heavy frost. At the conclusion of the five-hour contest, Curtis Meece and Chris Hagerdon won with 7.51 pounds of crappie and bluegill. It took nearly 20 pounds to win the previous week at the first Panfish Cup, which is a perfect example of how cold, stained water effects fish. Curtis and Chris took home a Bass Pro Shops gift card, $126 in Great Parks prize certificates and some really nice plaques. Brian and Brianna Short finished second with 5.63 pounds, and Jonathan Keller and Tom Doersam finished third with 3.62 pounds.

I expect those weights to go way up at our next Panfish Cup on April 12. It isn’t unusual to see 50 pounds or better to win these tournaments in April! 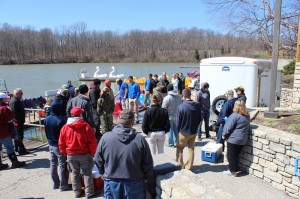 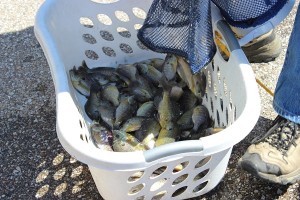 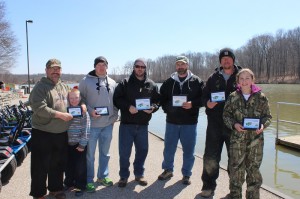