With our current winter weather conditions, it seems only natural to take a look into the Ice Age. It all started a very long time ago, about 1.5 million years ago to be exact. The earth was experiencing a great climatic change with periods of extreme cold separated by periods of very warm weather.

During the cold phases is when glaciers would form. A glacier is a huge mass of ice that slowly moves over land. There were four major glaciers in the United States, the Nebraskan, Kansan, Illinoian and the Wisconsinan. All four glaciers played an important part in our geographic history; however the Wisconsinan was the most recent.

Around 70,000 years ago the temperature dropped and snow and ice began to accumulate in northern Canada, forming a great sheet of ice known as the Wisconsinan glacier. Under its own weight, the glacier pushed its way south, eventually reaching northern United States around 24,000 years ago. At the Erie basin it was approximately 1 mile thick and by the time it reached central Ohio it was only 1,000 feet in depth. As the climate warmed up, the glacier continued to melt. It completely receded from this area about 14,000 years ago.

Even though the glaciers are gone, there are many things left to remind us of their presence. The clay, rock, sand and other debris pushed here by the glacier allows Ohio to be one of the top states for gravel and sand supply. Glacial runoff (melt water) carved out and formed important waterways such as the Ohio River and has given us a massive supply of ground water. Ohio’s rich agricultural soils are a result of the glaciers as well. 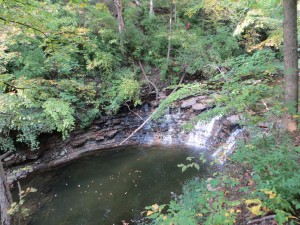 My personal favorite piece of evidence is the scenic views like that along the Sharon Woods Gorge Trail. So next time you are at the park be sure to take a walk along the trail and see all of the beauty the glaciers left behind.