4 Invasive Plants You Could Have in Your Backyard

Invasive species are recognized as one of the greatest threats to biodiversity across the globe, and our region is no exception.

As part of our mission to preserve and protect natural areas, Great Parks staff commonly manages invasive plant species within the parks and nature preserves. This important work prevents invasive plants from crowding out rare native species and disrupting ecosystem functions. Many of these species were originally introduced as ornamental plants for landscaping, but have since proven to be aggressive invaders in yards as well as natural areas.

If you find them lurking in your backyard, you can help Great Parks and conservation efforts throughout the region by removing them and replacing them with native species.

Great Parks follows the principles of Integrated Vegetation Management, where we use cultural and mechanical control methods whenever possible. However, some species are especially stubborn, and effective management requires chemical treatment. When using any herbicide, always read and follow the label completely, and take all recommended precautions, including proper personal protective equipment use. 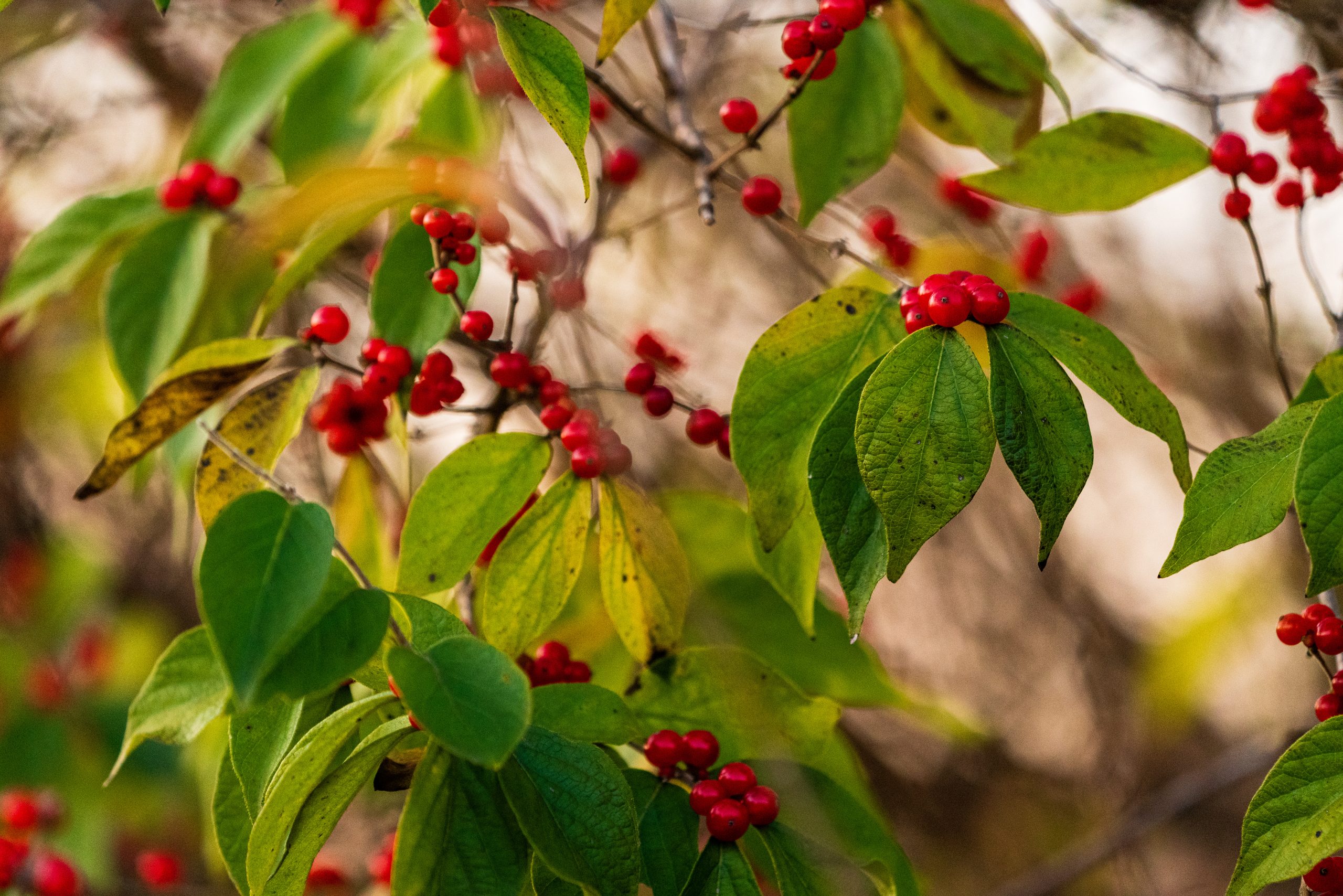 Amur Honeysuckle, sometimes also called bush honeysuckle, is one of the most common invasive plants in our region, both in backyards and natural areas.

Amur Honeysuckle, sometimes also called bush honeysuckle, is one of the most common invasive plants in our region, both in backyards and natural areas. This time of year it can often be easily identified by the large numbers of bright red berries found along the stems. Additionally, look for hollow stems, and pairs of light brown buds opposite one another on the twigs.

Seedlings and small plants can often be easily hand-pulled, especially after a good rain when the soil is moist. Honeysuckle will readily resprout when cut. Small numbers of plants can be repeatedly cut as new shoots emerge, until the root system’s energy stores are removed, but be aware this will likely take multiple years. Digging or grinding out the root crown will also prevent resprouting, but this often causes severe disturbance to the surrounding soil. Often the most reliable method to prevent resprouting is to apply an appropriate herbicide to the freshly cut stump. When using any herbicide, always read and follow the label completely. Want to learn more? Check out this fact sheet from the Indiana Department of Natural Resources. 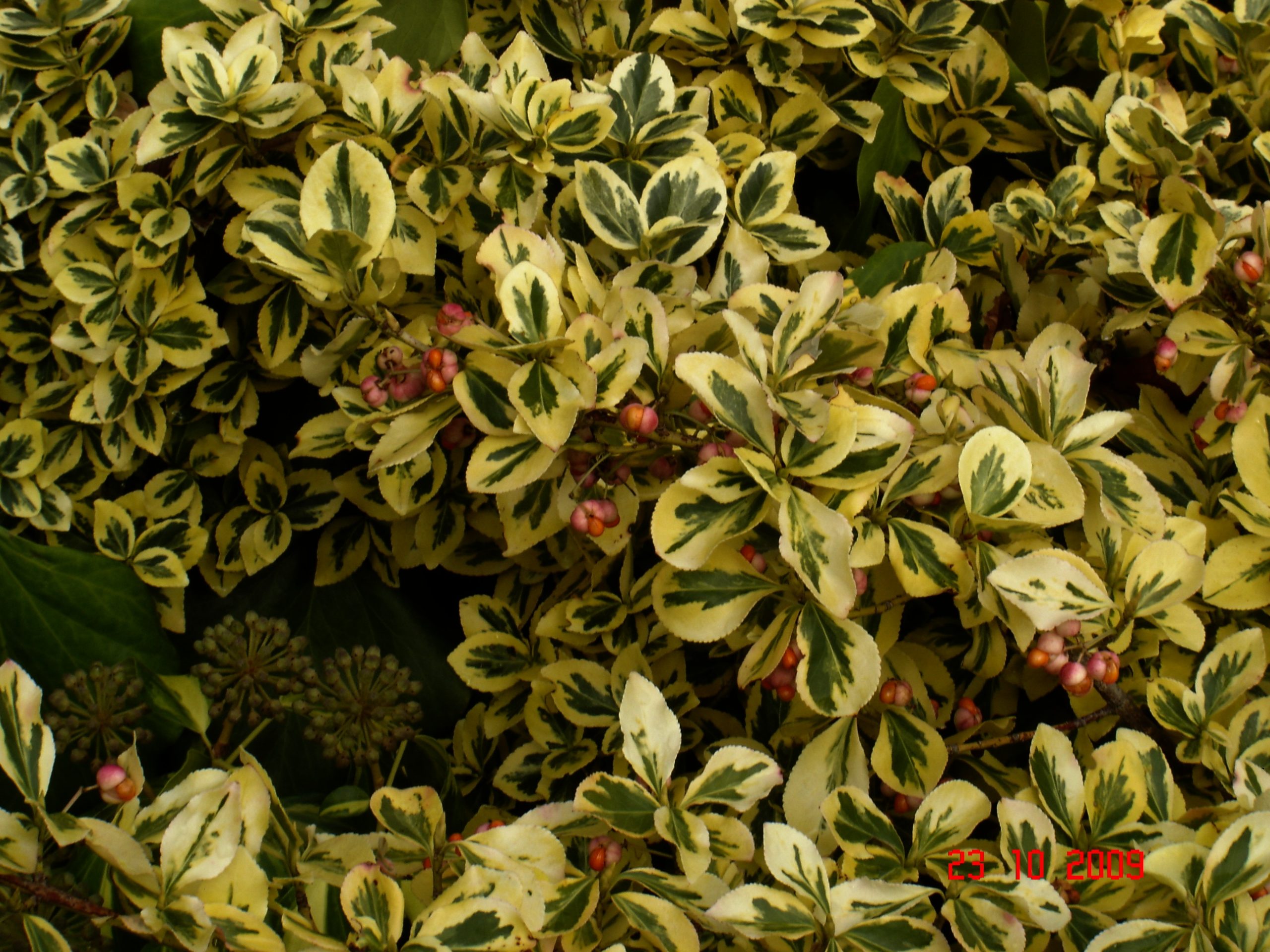 Wintercreeper (Euonymus fortunei), also known as creeping euonymus, is a vine with thick, leathery green or purple leaves that remain on the plant over the winter. Photo by peganum via Flickr/CC BY 2.0.

Wintercreeper, also known as creeping euonymus, is a vine with thick, leathery green or purple leaves that remain on the plant over the winter. This species was commonly planted as a ground cover, where it will spread to form a mat of tangled vines. However, when the vines find a tree or another vertical surface to climb, it shoots up and produces large amounts of berries. These are eaten by birds, which spread them to other yards as well as natural areas.

This species is typically shallowly rooted, so young vines and small populations can be pulled by hand (again, especially when the soil is moist). Larger vines may be cut off at the ground surface, and monitored for resprouting. However, older plants with significant energy reserves will likely continue to resprout for a long time. An appropriate herbicide can be applied to the cut surface of vines to prevent resprouting as well. Resist the urge to pull vines from trees, as this often rips up the bark, damaging the tree. The vines will decay and fall off the tree within a year or two. The Pennsylvania Department of Natural Resources has a great fact sheet for more info on this invasive plant. 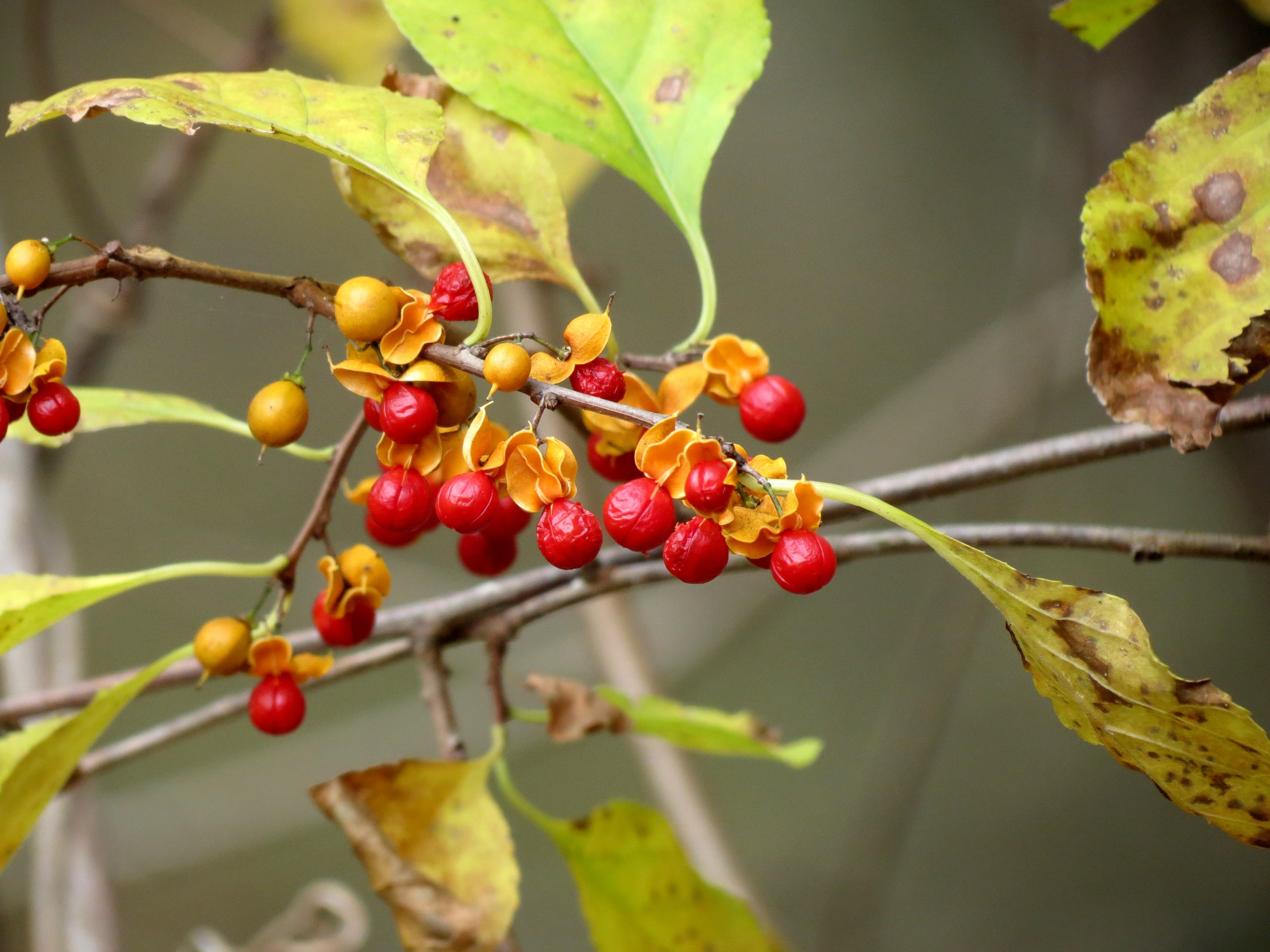 Asian bittersweet (Celastrus orbiculatus) can be identified by its clusters of bright red fruits and their papery orange husks. Photo by Katja Schulz via Flickr/CC BY 2.0.

Asian bittersweet is another invasive vine. Unlike wintercreeper, this vine is deciduous, so it will lose its oval-shaped leaves over the winter. However, it can still be identified by its clusters of bright red fruits and their papery orange husks. This plant is another introduced ornamental, and these attractive fruits were often used in wreaths and other winter decorations. This vine also has a distinctive twining habit – it climbs by winding its way around the trunks and branches of other plants. The vines constrict the growth of young trees and can eventually girdle even mature trees.

Fast-spreading Asian bittersweet is difficult to control. It is harder to hand-pull than wintercreeper, although it may be possible for young vines and seedlings. It responds aggressively to being cut, so treating the cut stems with herbicide is often the best way to deal with Asian bittersweet. Even then, follow-up may be necessary to deal with regrowth. As with wintercreeper, it is not usually necessary to pull vines out of trees once they have been cut. For more information, see the Indiana Department of Natural Resources’ fact sheet. 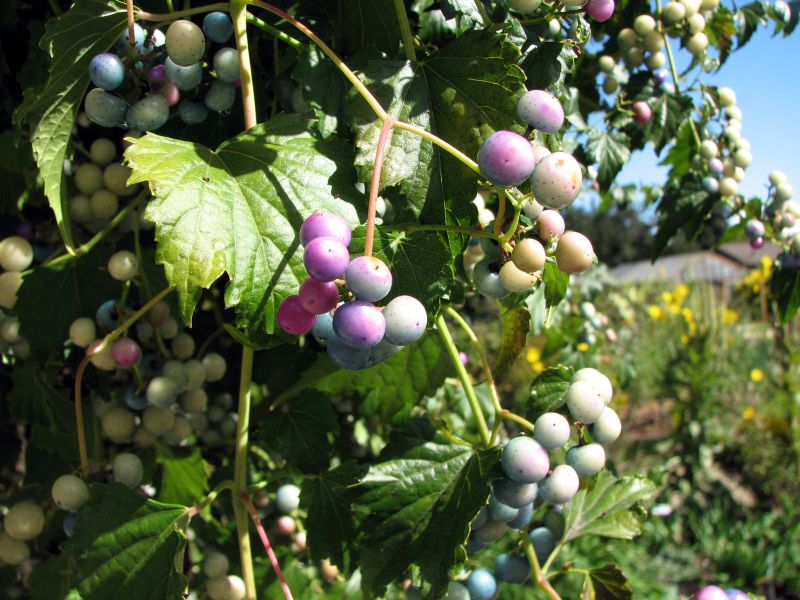 Porcelain berry, sometimes also called porcelain vine or Amur peppervine, is yet another invasive vine. This species closely resembles our native grape vines, with a few notable differences. Although the leaves will soon be gone for the year, when present, they are often much more deeply lobed than grape leaves. The most noticeable difference, especially at this time of year, is the color of the small fruits. They start out green, and go through shades of yellow, pink, blue and purple as they mature. A mix of colors is often present at the same time.

Treatment options are very similar to the other vines on this list. Small populations and young plants may be hand-pulled, but new sprouts will likely need follow-up treatment. This species can grow as much as 15 feet in a year, so treating cut stumps with appropriate herbicide is usually needed. Porcelain berry often overtops and smothers trees and small shrubs, so it may be necessary to remove the vines to allow these desirable plants to grow. Although this species climbs using tendrils, and is not usually as strongly attached to bark as wintercreeper, care should still be taken if attempting to pull vines off of trees, as this can break branches and cause more harm than good. Get more info from the Wisconsin Department of Natural Resources here.