For the last 33 years, Great Parks has conducted a butterfly count in the western Hamilton County parks headed by former Great Parks Ranger and current VIP Bob Nuhn, in collaboration with the North American Butterfly Association. One Saturday every July, employees, volunteers and the public head out with sunscreen and binoculars to count the number and diversity of the butterfly populations in Hamilton County. This year was an exciting one, in that the monarch butterfly count was the fourth highest in the count’s 33-year history at 54 individuals! That is up from 15 individuals last year, and seven individuals in 2016. 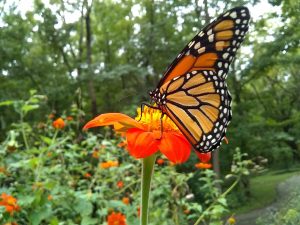 If you have spent any amount of time in the parks or in your backyard, you have probably seen a monarch butterfly (Danaus plexippus) gliding from flower to flower. They are feeding on nectar, gaining energy for their long migration to a mountaintop in Mexico. There are roughly a dozen mountaintops in Mexico where the climate stays just right for the monarchs to survive the winter: too cold and they freeze; too warm and they waste valuable energy they need for the return trip north. They gather by the millions on oyamel fir trees (Abies religiosa), also known as sacred fir. The winter of 1996-1997 saw 45 acres in Mexico covered by overwintering monarch butterflies. In 1996, the butterfly count saw 71 monarch individuals. In contrast, the winter of 2013-2014 saw only 2.5 acres covered in Mexico. The numbers counted here in southwest Ohio were also down: only four were counted in 2013.

Could the higher numbers we saw here this summer mean higher numbers in Mexico this winter? Are we seeing a resurgence of monarch butterflies this year? Only time will tell, but the numbers certainly are promising.

Many factors play into the population growth and decline of monarch butterflies. One major factor is the abundance of milkweed plants, the host plant from which monarchs obtain the toxins they need to survive. And what contributes to the abundance of milkweed? You! Plant some milkweed! It is easy to grow. It is beautiful. And it attracts monarchs. More importantly, milkweed helps monarch populations grow. That is a win-win if I have ever seen one.