What Are Those Big Birds?

If you’ve spent any time at Winton Woods Campground this summer, you may have witnessed a rather unnerving site. Just as the sun is setting and daylight begins to fade, large birds with a six-foot wingspan glide in and cover the trees. A closer look reveals huge wings, a naked head and a razor sharp beak. Although these ugly creatures may look like something from a nightmare, I can assure you, they are not part of an Alfred Hitchcock remake. 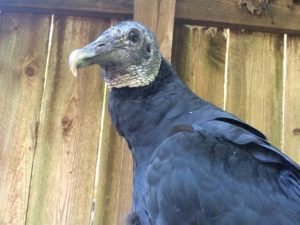 Just like campers, these vultures are simply looking for a calm place to spend the night. The trees become a gathering ground as they return from their feeding and settle in for the evening. In some instances, over 100 vultures will share the same roosting site! No one is quite sure why these social animals come together in such large numbers at night. Perhaps they find safety from predators in large numbers, or they are simply pulled by instinct to the same spot. It has even been suggested that these gatherings serve as a chance to share information, such as where food is available.

Keep observing, and you may notice that most of the birds are brown with featherless, red heads. These are turkey vultures (Cathartes aura), and are a very common sight. They’re often spotted soaring on the thermals, high above the ground as they search for carrion. With a well-developed sense of smell and excellent vision, these birds find their way to food with ease. As they feast, they are often interrupted by some party crashers: the black vultures.

Hamilton County is just about as far north as the black vulture (Coragyps atratus) ranges. Although smaller than their cousins, these birds are much more gregarious than the turkey vulture. Traveling in greater numbers and lacking a sense of smell, they are known to follow the turkey vultures to food. Being more aggressive, they jump into the feast and fill their bellies. As they feed, they serve as nature’s garbage crew, cleaning up the carrion and reducing the spread of disease. Both species will gorge themselves until they are so heavy, that they can hardly fly, and will regurgitate their meal if threatened. (Trust me, you do not want to be on the receiving end of that deal!)

Along with vomit as a defense strategy, vultures have several other disgusting habits. When eating, they will often stick their bald heads deep into the carrion in search of what’s most delicious to them. Luckily, their featherless heads prevent goo from sticking and keep bacteria from growing. If they are too hot, they will simply use the bathroom on their own legs. After all, they can’t sweat like we can, and evaporative cooling is highly effective.

That being said, these birds really are amazing creatures. One of my favorite things to do is sit in a shady spot and search the skies. When several are soaring together, their spirals look as though they are choreographed. Watching these dances can have an almost meditative quality on a busy day, reminding me to slow down and enjoy the journey. In fact, some of our animal ambassadors are black vultures, like Curly (above). Curly joins the interpreters for many educational programs throughout the year. Being hand-raised, he never learned proper vulture behavior and is now dependent upon humans for survival. His role as an animal ambassador is extremely important in helping people understand and coexist with these incredible birds

Next time you encounter a vulture, take some time to appreciate the beauty within the beast.