As the early settlers of the U.S. forged westward, their main priority was finding a place to call home. However, as they began to inhabit our country, not only did they affect the animals who lived here first, they affected where these creatures lived. The natural predators that called Ohio’s landscape home – the black bear, the bobcat and the eastern wolf – drastically reduced in size with colonization. Prior to the mid-1800s, coyotes were only found in the western U.S.  But as people colonized states, and populations grew, native predators became more and more scarce. Species native to other parts of the U.S. began traveling across the country to find a new home. 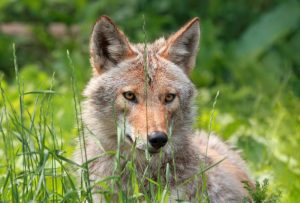 The eastern coyote came about from interbreeding between western coyotes and the remnant gray wolf.

With Ohio being void of apex predators, a vital niche was left unfulfilled.  That is, until the coyotes arrived. Before Europeans settled the new world, coyotes (Canis latrans) were only found in the American west. Then, in the 1940s, western coyotes started moving east into the northern Great Lakes region after the extirpation of the gray wolf. Interbreeding between western coyotes and the remnant gray wolf (Canis lupus) populations of the Great Lakes region gave birth to a new species: the eastern coyote (Canis latrans × Canis lycaon [or Canis latrans var.]). Being masters of opportunity, the eastern coyote soon swarmed Ohio and other eastern states. They quickly adapted and claimed the once-empty title of apex predator in Ohio.

The opportunistic behavior of the eastern coyote makes them adaptable to many environments, including urban and suburban areas. Their diet varies, and is largely based on the time of the year. Small rodents, such as mice, rabbits and voles, are a staple in the coyote’s diet. Though, eastern coyotes have been known to consume larger animals, such as deer. However, because they are opportunistic feeders, eastern coyotes are both hunters and scavengers. Meaning they don’t regularly kill deer, but typically feed on the carrion deer leave behind. Coyotes have been known to eat deer during the winter months. Other food sources such as berries, vegetables and nuts are regularly consumed as an easy meal.

The cunningness and adaptability of the eastern coyote has brought them a little too close to home for many people. Coyotes are now common in city and suburban environments, as it has proven to be a bountiful food source for this resourceful predator. Those who are fearful of coyotes should take precautions against attracting them. Removing pet food and garbage, and cleaning up around outdoor grills are a good start to prevent coyotes from getting too close to your home. Small mammals make up a majority of the coyote’s diet. If you’re worried about your pet, keep small dogs and cats indoors, or supervising them while outdoors, is a good way to deter predation. Coyotes are particularly fearful of humans, so your presence can deter a problem before it arises.

Predators are a necessary part of any ecosystem. Without them, the checks and balances that keep our natural areas functioning are nonexistent. We must move past the inherent fear of predators and work toward a lifestyle that embraces them in a spirit of coexistence. Humans, after all, are the greatest predator that this world has ever seen. And like the coyote, we’re working to adapt and survive.