What Happened to That Fish? 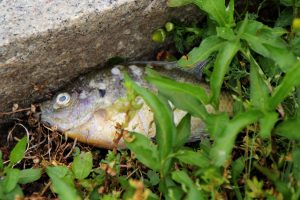 Lake and pond habitats are very complex habitats. They are influenced by soil conditions in the watershed, water chemistry and temperature changes from rainfall and resulting runoff, heating from the sun and cooling from groundwater inputs. No two bodies of water are the same, but a common question we get from visitors in the summer is, “What happened to that/those fish?”

Here are the top five things that contribute to summertime stress to fish populations; any one or a combination of several can lead to die-offs.

Sometimes several of these items occur simultaneously. Imagine how many times we experience this in the summer: hot weather, warm water temperatures at the surface, combined with a heavy night-time thunderstorm which brings could possibly wash organic matter into a lake.

Each circumstance is different, but you can see how so many cultural, physical, chemical and biological processes influence lake and pond habitat.