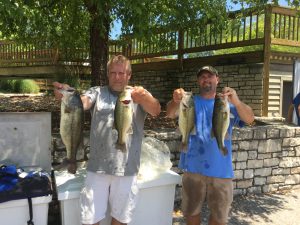 Twenty-seven teams competed in the Great Parks Bass Series presented by Bass Pro Shops on Saturday, June 30, and the big bass that Miami Whitewater Forest Lake is famous for showed themselves again!  The heat index was over 100 degrees by the 1 p.m. weigh-in, and 17 teams brought fish to the scales.

But in the end, the day would belong to Mark and Mike Toht. They flipped key areas of shade and caught 5 big bass totaling 15.62 pounds! That included the biggest bass of the day at 4.81 pounds.

In doing so, they have amassed a commanding lead in Angler of the Year points with 144. Brent Jones is their closest competition, going into the final event with 133 points.

The sixth and final Bass Series Tournament of 2018 will be at Winton Woods Lake on July 15.  This mid-summer event is always a favorite among our anglers because we see big numbers of bass caught. A square bill crankbait will be mighty hard to beat…as will the Tohts! 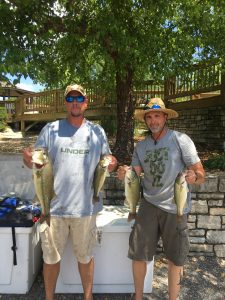