Our national symbol, the bald eagle, begins to think spring earlier than some other animals. This is a great time of year to put your eye to the skies for an opportunity to see this bird soaring above. Here are six facts to keep in mind as you keep watch:

1. They’re picky about where they live
Establishing their territory, which is usually within a 2-mile radius, is quite important. Bald eagles are sensitive to an over-abundance of human activity. They can be deterred from an area if there is too much presence from other eagles as well. Their favorite food is fish, so it is imperative for them to live in close proximity to a waterway. 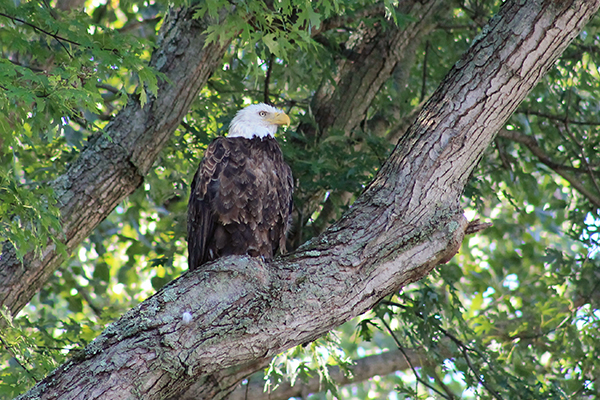 2. They make seriously huge nests
Once the territory is established, bald eagle pairs will return to the same nest site year after year, and usually to the same mate. Both the female and male assist in nest building and repairs in a unique way. Nesting material is added each year, not taken away, allowing for some pretty large nests. Some weigh in at a ton for long-time pairs!

3. They’re busy parents
Throughout the months of October through December, this bird’s mind is on one thing…love. The female will lay 1–3 eggs in February or March. During this time, there is much to do. Bald eagle parents are busy sharing the incubation duties and, eventually, hunting for food for the young…and themselves. Incubation normally lasts 35 days, meaning the birth day is usually in April. As the rest of nature awakens, food becomes plentiful and more readily accessible. Ice melts, allowing for more efficient hunting. After 10–13 weeks, eaglets are grown enough to leave the nest. Usually, this takes some prodding from mom and dad. The parents are tired by this time and looking for some rest and relaxation. Plus, with the size of the young, there is not much room left in the nest at this point! 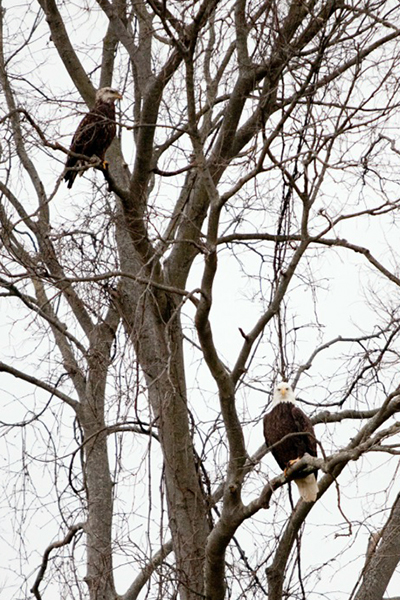 A juvenile and an adult bald eagle at Mitchell Memorial Forest

4. They’re more common than they used to be
A great success story, with much credit going to conservation efforts over many years, the bald eagle is no longer on the federal endangered species list. In fact, the federal and state status for the bald eagle is “delisted”. The population will be monitored for the next five years to assure things are stable, but for now things are looking up as groups like Great Parks protect more of the eagles’ habitat, hunting grounds and water.

5. They can pull off some intense aerial acrobats
Bald eagles are serious about guarding their territory. Occasionally, you may see two eagles grappling with their talons in mid-air, as one eagle re-establishes its areas with an outsider eagle. It almost appears they will forget to fly and plummet to the earth, talons locked. Somehow, they have a handle on flight and fight, disengaging at what seems to be a dangerous last-minute moment.

6. You can see them at many Great Parks
Protecting more than 40 miles of local shoreline, Great Parks is known for bald eagle sightings. Eagles have been seen at Campbell Lakes Preserve, Fernbank Park, Kroger Hills, Lake Isabella, Little Miami Golf Course and Otto Armleder Memorial Park. Shawnee Lookout and Miami Whitewater Forest are especially great spots on the west side of town. And with its proximity to the Ohio River, eagles are frequently seen at Woodland Mound in Anderson. 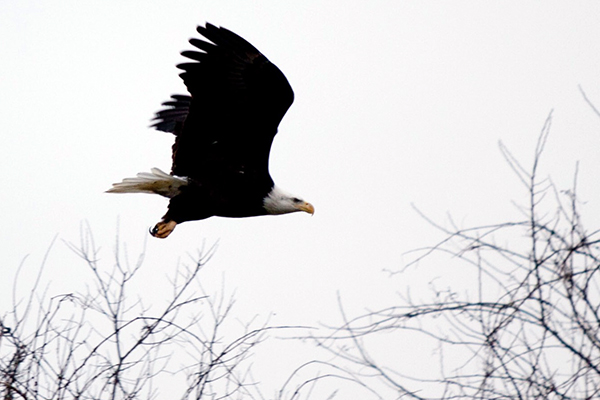 Next time you’re out in the parks, be sure to turn your eyes to the sky. Happy watching!