Make a list of some of the most endangered animals on the planet and the first that come to mind might be large mammals like tigers, rhinoceroses and gorillas. However, some lowly mollusks should be on the list.

Mussels are some of the most endangered animals in not only Ohio, but also the country. Approximately 70% of America’s mussels are extinct or endangered. Ohio alone was home to six now-extinct mussels. Eleven of our mussel species are extirpated, which means they are extinct from Ohio, and 24 are on our state endangered species list. The damming of rivers and streams, pollution and soil erosion have all contributed to their decline.

Ohio is home to one of the most endangered mussels on the planet: a purple cat’s paw (Photo by Angela Boyer/USFWS)

Mussels have a unique lifecycle limit that has a low tolerance for human-caused disturbances. Fertilized eggs grow inside a female mussel. When those eggs are ready for the next stage of life, she releases them into the water where they attach to the gills and fins of fish. Some mussels require certain species of fish to reproduce, and some mussels have developed special appendages that act as a lure to attract host fish. The larvae, called glochidia, grow on the fish into microscopic juvenile mussels and then eventually drop off after a few days or weeks. Dams interrupt this process by restricting potential host fish from reaching the mussels.

The disappearance of mussels might seem inconsequential, but they have huge economic and ecologic importance. The modern pearl industry relies on our mussel shells. Local shells are shipped overseas, ground down and then inserted into salt-water mussels in order to make cultured pearls. In the past, mussels were part of a thriving button industry. Collected from river beds throughout the Ohio and Mississippi River valleys, the mussels’ shells were drilled for clothing buttons. The iridescent sheen of our modern dress shirt buttons harkens back to a time when mussels were prized for their decorative look.

Ecologically, one of their most important roles is that they help maintain clean water by acting as a water purifier. As they filter the water around them for microscopic food, their tissues absorb harmful pollutants and contaminants in the water. They are also a food source for animals such as raccoons and river otter.

If you look closely, you can spot mussels in many spots throughout Great Parks. They’re in the lakes at Miami Whitewater Forest and Sharon Woods, as well as some of the smaller ponds at Shawnee Lookout and around the golf courses. The Little Miami River is also a good place to find them due to a little less pollution and siltation than the Great Miami, Whitewater and Ohio Rivers. But you can still find them there, too. 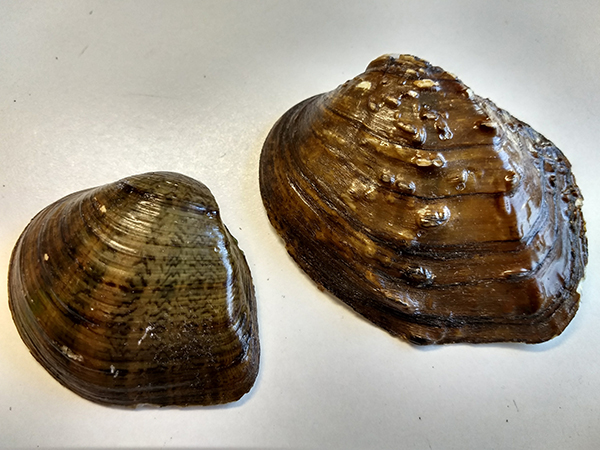 Deertoe (left) and Mapleleaf (right) mussels that can be found in Ohio’s rivers and streams.

And it’s not too late to protect them! There are small steps that you can do to help the plight of the mussel. Planting trees along waterways slows the erosion of soil that, when it washes into streams and rivers, can bury and smother mussels. Limiting or eliminating pesticide use at your house also cuts down on toxins that can harm or kill mussels. It’s up to us to look out for these often-overlooked animals.