Native Bees on the Brain

Honey bees are awesome. Not only do they pollinate our plants and create honey, but how they communicate with each other to create working a hive of 60,000 bees is fascinating. (If you haven’t seen bees doing their “waggle dance” to tell other bees where the best food is, I highly recommend you Google it.) Unfortunately, the charismatic honey bee tends to overshadow the equal awesomeness of some of our native bee species. Native bees have some really interesting characteristics of their own, and they are going through many of the challenges the more famous European bees have been facing.

In the United States, there are at least 4,000 species of native bee that don’t make honey. In Ohio alone, there are around 500 different species. And they’re all just as interesting as honey bees. Polyester bees create plastic to protect their eggs, Hylaeus bees eat pollen instead of sticking it to their body and leaf cutter bees have great big mandibles they use to chop leaves for their nests. 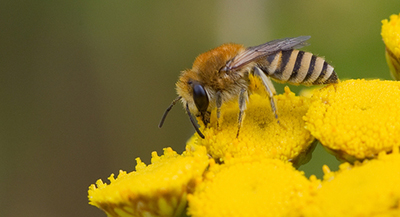 Native bees come in all different colors, such as the aptly named blue orchard bee that is a dark metallic blue. Orchard bees are also called mason bees, since they use mud and other “masonry” materials to line their nests inside hollow stems or holes made by other insects. A relatively gentle bee that loves to pollinate fruit, mason bees are easy to attract to your house by drilling 5/16th inch holes into wood or by buying “mason bee house” made from bamboo. 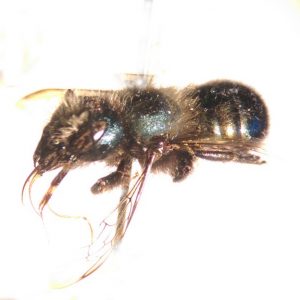 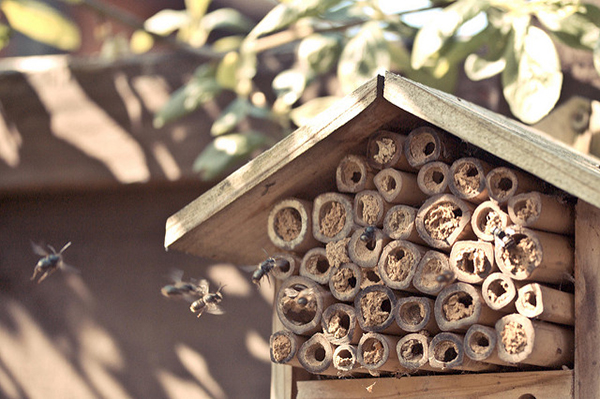 Mason bee house (Photo by poppet with a camera on Flickr)

Some of Ohio’s bees only collect pollen from one species of plant. For example, the trout lily andrena will only visit white trout lilies, while Andrena nothoscordi will only visit a rare plant in Ohio named false garlic. Unfortunately, this means that if the plant disappears, then so will the bee. While dramatic events like colony collapse disorder are very noticeable, if a species of native bee disappears that can only be identified by its tibial spurs, it will be hardly noticed other than by entomologists. Sadly, entomologists are noticing a decline in native bees as a result of habitat loss, reduction of native plants and competition from introduced species. It is feared that the introduced mason bee from Japan named the hornfaced bee might be outcompeting our native bees. 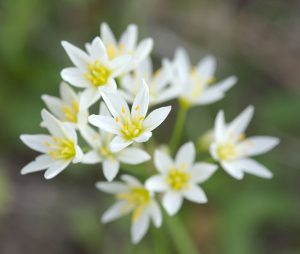 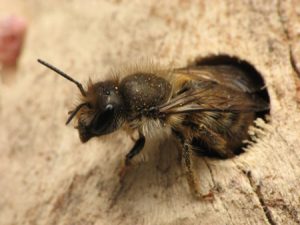 The bee that recently won the depressing award for being the first bumble bee on the endangered species list is also native to the United States. Named the rusty patched bumblebee because of a red marking on their back, they were once as common as squirrels and robins. However, due to diseases from non-native bees, exotic plants, pesticides, and habitat loss, its numbers have decreased by almost 90%. 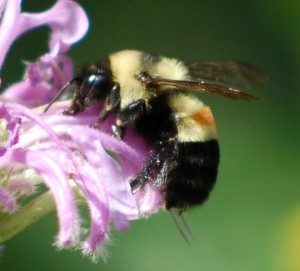 The plight of our native bees isn’t the happiest information to share, but understanding our bees’ challenges helps us appreciate how cool they are. If you would like to learn more about North America’s bees, I’d recommend checking out “The Bees in Your Backyard” by Joseph Wilson and Olivia Messinger Carril. And if you come across a native bee, be sure to share to a picture of it with us on Facebook!