The Aroma of Spring

Can you smell it? Spring is in the air. I don’t mean the aroma of flowers or rain or anything most people find remotely pleasant. It’s actually the first trace of skunk that makes me happy. Their stirring from winter dens is proof the ground is warming, creeping toward the next season. 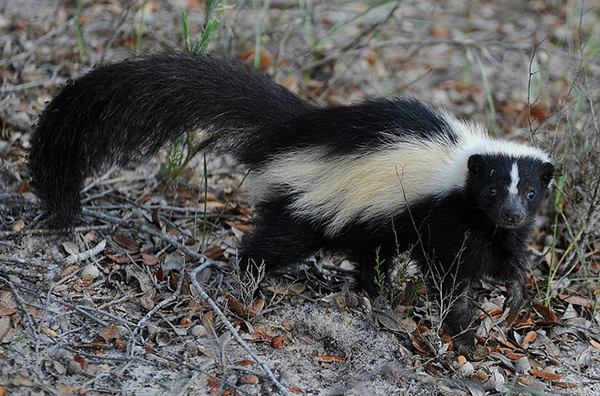 This boldly marked member of the Mephitidae family is scientifically named “bad odor” twice – Mephitis mephitis – just in case anyone has doubts about its stinkiness. Two glands equipped with nozzles are located under the deceptively cute fluffy tail and hold only about one tablespoon total of eye-watering liquid.

When agitated, the skunk warns its aggressor by first stamping its feet. If this show of annoyance isn’t sufficient, it then raises its striped tail as a warning. Why anyone would be waiting around for the next phase of defense is beyond me, but those of you with dogs know that they’re a little slow on skunk body language. When a skunk sees absolutely no other way to show disapproval, it turns around with tail lifted and curves its body into a C shape so it can line up the target. Unfortunately we know how this story ends.

It’s hard to believe only a couple of drops are released at a time, but because they’re diffused rather than actually sprayed, it would be unwise to stand within 15 feet of a skunk. This chemical defense is strong enough to burn eyes and cause temporary blindness at close range and can be smelled up to a mile away. The skunk’s aim is so precise that it rarely ever gets any musk spray on their own fur, so the animals themselves are not stinky. 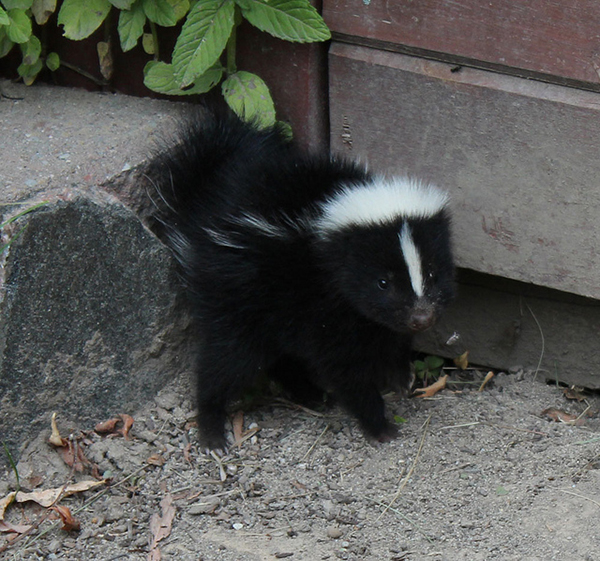 In their 3 to 5 year life span, skunks waddle along, foraging on grubs, insects, amphibians, crayfish, seasonal fruits and even small mammals. Great horned owls are their main predators, due to the owls’ not having much of a sense of smell. The tendency to see skunks along the side of the road this time of year is not because they fail to look both ways, but likely due to illness causing them to wander into the road. Skunks are very aware of busy roads, which become territorial boundaries. Harsher winters can cause them to deplete energy resources enough to be overcome with illnesses such as pneumonia, distemper, parvovirus and parasites. In extremely difficult years, up to half the skunk population will not emerge from their burrows. Lucky for us, it has been a relatively mild winter, so we’ll have plenty of opportunities to catch a whiff of that unusual harbinger of spring!

Editors note: A previous version of this article listed skunks as belonging to the weasel family. However, the animals were recently reclassified and given their own family: Mephitidae.