As the old saying goes, “One man’s trash is another man’s treasure.” If there is one animal that truly puts this saying into action, it’s worms. These little creatures are nature’s version of the Greek myth of King Midas, who was said to be able to turn objects into gold just by touching them. Now, worms don’t literally turn objects into gold, but they do help decompose food waste into a natural, organic fertilizer. This process is called vermicomposting, and vermicomposting is an effective way for us to turn trash into treasure. 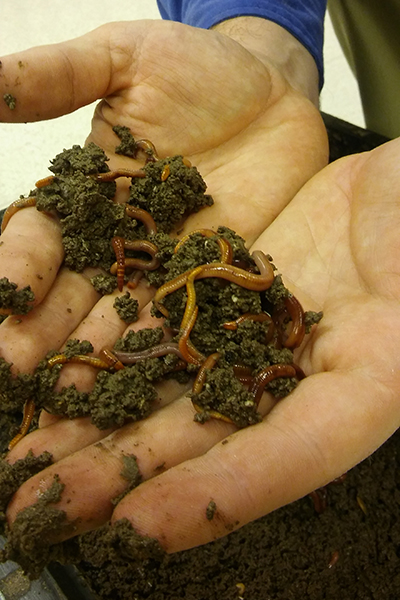 Setting up a worm bin is pretty easy, but before you start, it is important to know that not all worms are suitable for vermicomposting. Canada night crawlers do not do well in a compost bin. We like to use a worm that goes by many names, including red wriggler, tiger worm and just plain old “red worm” (Esenia fetida). Although these worms are actually native to Europe, they are found all throughout our area. Still, we take extra precautions so that they aren’t accidentally released outside.

There are plenty of ways to set up a worm bin, but at Miami Whitewater Forest we use a system of stacked plastic bins, which makes the harvesting of compost and worms easier. The idea is simple: give the worms the things they need, and they will take care of the rest. So what do the need? Well, a relatively warm (55–77 degrees Fahrenheit), moist (but not too wet), dark container with some bedding and food is ideal. That’s it! 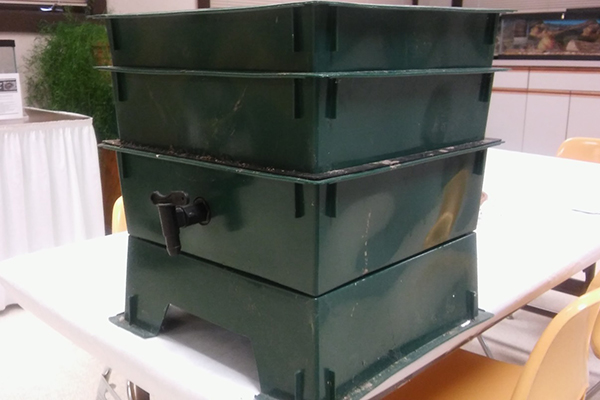 In order to create the worm’s bedding, just mix some water with shredded paper. This gives the worms someplace to hide under and crawl through. Since worms “breathe” through their skin, the bin’s moisture helps facilitate that process. The bedding also gives an area for their eggs and young to develop as they reproduce. Worms are both male and female, but two are needed to reproduce.

After the worms have a nice layer of bedding, you’ll need to give them some food. Adding about a pound of food scraps will generally feed a pound of worms. The worms at Miami Whitewater Forest are typically fed a mix of apple cores, banana peels, vegetables, old tissues, paper plates and the occasional plant cuttings. Since worms don’t have teeth to chew their food, usually smaller pieces work. Our worms tend to especially enjoy old bits of spaghetti squash.

After about two months of weekly feeding, we are then able to harvest the worms’ “brown gold.” Our bin has a special spigot that allows us to drain “worm tea,” a nutrient-rich liquid of worm manure. The worm manure, known as castings, is a great soil conditioner. We use it on our indoor plants as fertilizer and also give some to Shaker Trace Nursery, so they can use it help grow native plants from locally harvested seeds. 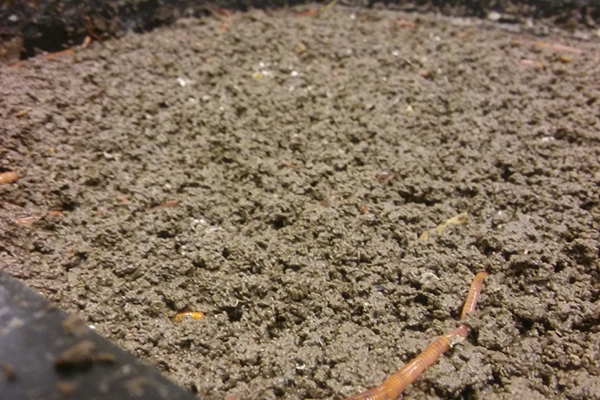 A fresh batch of worm castings ready for harvesting.

As you can see, in very little time at all, nature’s alchemists turn our food waste into a valuable object that we can use to grow more plants – an impressive feat for a bunch of tiny animals with no hands!

To check out our worm bin in action, stop by the Miami Whitewater Forest visitor center. You can also bring us shredded paper that we’ll use for worm bedding.