What’s 2-4 inches long, has an impressive set of pincers and could be lurking in a creek near you?

I wouldn’t be surprised if you’ve never encountered one of these interesting critters, even if you spend much of your time outside. These secretive aquatic insect larvae (the juvenile stage of the dobsonfly) are masters of making themselves scarce, spending most of their time under rocks in swift moving water. The soft, feathery gills and spiracles located all along their abdomens help them absorb oxygen, but also allow them to breath on land. They use their impressive jaws, called mandibles, to catch and eat their prey, which includes tadpoles, small fish and other aquatic insect larvae. They can also occasionally latch on to a wayward human hand that may be out flipping over rocks in a neighborhood creek hoping to find something slightly less creepy, such as a crayfish. This first stage of their life cycle can last for up to three years, encompassing 10-12 different molts (growing and shedding stages). 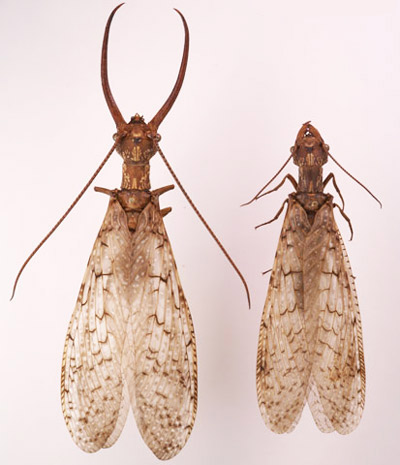 When they’re ready, hellgrammites leave the water to pupate, choosing a site close to the water — typically under a rock, log or some type of debris that maintains a moist environment. After about 14 days, the adult form emerges. These large, stout-bodied insects have large wings but are weak flyers. The adult female’s strong mandibles can deliver a painful bite, but the male’s elongated, curving mandibles make them incapable of biting. Instead, they are used for competing with other males for the female’s affection and possibly for helping the female gauge the health of the male. Of course, as many of us know, adult have a bit less fun on average. Adult dobsonflies live only an average of 3 days for the male and 10 for the female, with their main duty being to mate and die. It is believed that adults don’t even eat!

Whether you look to the sky or the water, you can keep your eyes open this summer and try to spot these cool critters in either form.