Winton Woods Lake has a reputation as one of the top crankbait lakes in Ohio, and on a beautiful day in June, it didn’t disappoint! Perfect weather and water conditions greeted 33 teams of anglers on Sunday, June 12, for the Bass Series Tournament. They fished from 7 a.m. until 1 p.m., and by the conclusion of the weigh-in had brought 160.76 lbs. of largemouth bass to the scales!

Eight out of the 33 teams weighed five-bass limits. Cole Wessner caught the biggest bass of the day, which tipped the scales at 4.42 lbs, and won a gift card to Hamilton Bait & Tackle. Brent Jones reported catching more than 20 keepers on crankbaits, but his 10.3 lbs would only be good enough for seventh place. Brent generously loaned a favorite lure to the team of Jake Richardson and Corey Robinson, and they fished it to a 12.82 lb bag and a third place finish. They won $325.50 in Great Parks’ gift cards. Andy Asbrock and Andy Thomas finished second with 14.97 lbs, winning $542.50 in Great Parks’ gift cards.

On a day that 26 of the 33 teams would bring fish to the scales, Julio Delgado and Paul Regensburger topped the field with a huge limit weighing 15.18 lbs! They won $759.50 in Great Parks’ gift cards. 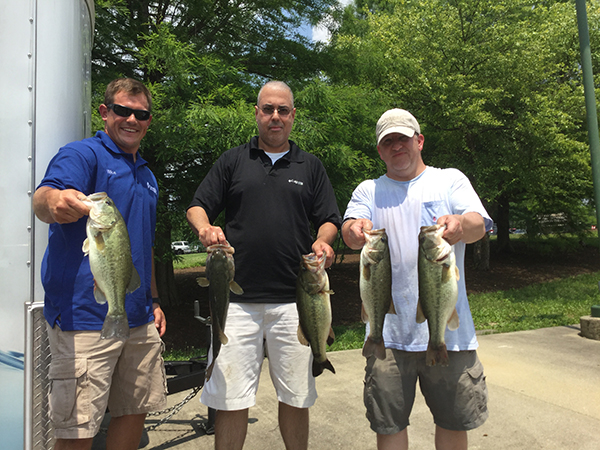 A big thank you goes out to everyone for their care of the fish. Every fish was successfully released alive back into the lake thanks to everyone bringing their own live wells, handling the fish carefully and changing the water throughout the day to keep the fish alive. Those efforts really paid off on a hot day.

The next Great Parks Bass Series Tournament will be at Miami Whitewater Forest on July 9. I hope to see you there!