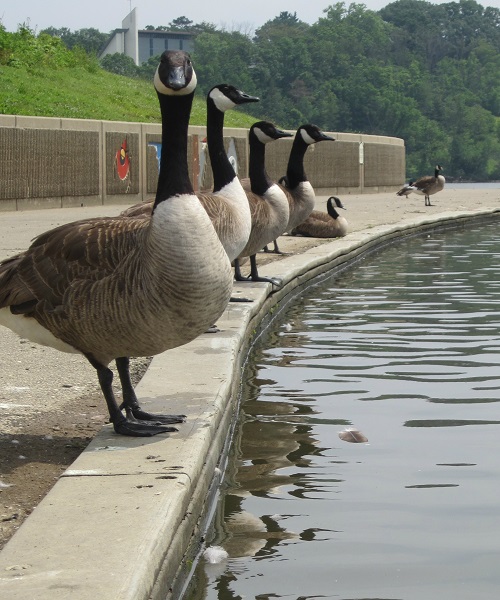 “Exgoose Me” photo by Maria Dehne

Just the other week, we received a desperate call at the naturalist desk informing us that numerous Canada geese were caught in fishing line at the Winton Woods campground. Not only were the geese caught, but children were getting pretty upset about it. So I gathered gloves, a big net, a blanket, food and googles – everything but the kitchen sink – and headed over. I was not sure what I would come upon, and I even began to wonder if I could even really help at all.

When I arrived at the scene at about 11:15 a.m., three boys ages 12 and 13 greeted me. They shared that they had been watching the geese since they starting fishing at around 7 a.m. The boys immediately took me toward a large group of geese feeding on the grass, pointing out two geese that seemed hobbled by the fishing line. One was much more entrapped, with line wrapped numerous times around one leg that was then connected to the other, so that the goose walked awkwardly. We chose to assist that goose.

I attempted several times to catch the goose with the net while two of the boys, Sam and Elijah, worked valiantly to corral them. To be honest, I was not a very good goose wrangler. William, the eldest of the boys, said he thought he could do it. So I turned over the net to him. And sure enough after numerous tries, with the grace of an athlete William safely caught the goose. 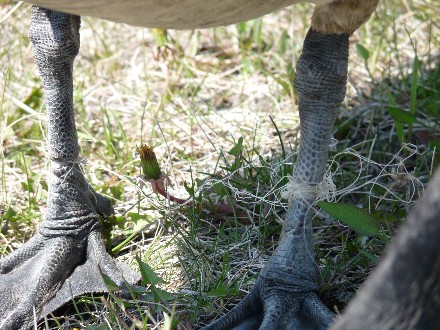 I put the blanket over it to protect us from the beak should the frightened goose want to retaliate. One of the boys began to cut the line off while I held the goose securely. He turned the job over to me, feeling a bit uncertain about how to get the very tightly wrapped line off. Soon I was able to gingerly cut the remaining line. I invited the boys to touch the goose’s feet, which were surprisingly warm.

Just about that time, one of the Great Parks’ rangers arrived to assist with the final release. On the count of three, we pulled the net and blanket off, and the bird flew away to join the others as if nothing had happened. We all let out a big cheer. Wow! We actually rescued the goose, and these boys had spent their entire morning working to help the bird. After chatting a bit more, I learned that the boys had even named William the “Goose Whisperer,” because he had been calling and talking to the geese during the morning.

I felt very strongly that this rescue was an important life lesson for these young lads. I was inspired by their tenacity and deep caring for the tangled goose. Never mind that geese are not valued by many. These boys chose to help an animal in need, and that was all that mattered. If we could all be that compassionate toward someone or something, I am sure the future will be brighter. And our youth have shown the way!