In celebration of a certain movie that is soon to be released, I would like to share a short story. As a small child, I witnessed an event that changed my life forever. Three velociraptors, the most terrifying yet thrilling creatures I have ever seen, had surrounded Dr. Grant and his companions. It seemed there was no possible way for them to escape. Then all of a sudden, the king of lizards appears from nowhere and scoops up the raptor in her massive jaws. Another leaps onto the side of the T-Rex’s neck, but she throws them into the side of the museum, destroying all of the exhibits. As the museum is collapsing, the banner titled “When Dinosaurs Ruled the Earth” descends upon a 40-foot long roaring animal seen previously only in books and cartoons.

Along with most young boys, the movie “Jurassic Park” instantly inspired me to become a paleontologist. Unlike most other boys, this dream never really left, and transformed me into an advocate for conserving today’s species so they don’t go the way of the dinosaurs.

Now I have the pleasure of teaching children and the public about the life that surrounds us — and also the amazing creatures that lived in the past. Sometimes, though, those lines become blurred. For example, did you know that many of today’s animals lived during the ice age? Mountain lions competed with smilodons, mammoths grazed with deer and even humans were around causing all kinds of trouble back then. While the ice age is a pretty cool era, what’s even more exciting is I get to handle an animal that can trace its roots to the time of velociraptors and sauropods.

With a 4-foot wide wingspan and large intimidating talons, the red-tailed hawk is a top predator. In the wild they soar at a great height until they find their prey of choice, usually a small mammal such a rabbit or squirrel. After their prey has been chosen, they will lock onto it like a missile locking onto its target, and dive at speeds up to 120 mph. When close enough, they will stretch out their talons and grasp their prey with such force their prey is killed instantly. 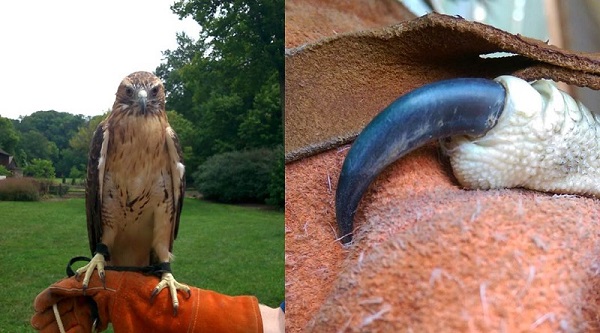 Claw from a massive dinosaur known as the allosaurus

The velociraptor from the movie shares similar intimidating claws as the hawk (much larger of course), but the similarities between birds and dinosaurs don’t end there. For example, anyone who celebrates Thanksgiving has broken a turkey’s wishbone or two. Another name for this bone is the furcula, which is found in both bird and dinosaur skeletons. Even the mighty T-rex had a wishbone similar to modern birds! It is also accepted among scientists that many dinosaurs, including the velociraptor, had feathers.

So when I handle the red-tailed hawk, I see the talons protruding from his scaly feet, imagine the dinosaur-like furcula inside his chest and can’t help but be mesmerized by feathers that once belonged to animals that lived over 65 million years ago—a time when dinosaurs ruled the earth.