The Turtle of Winton Centre 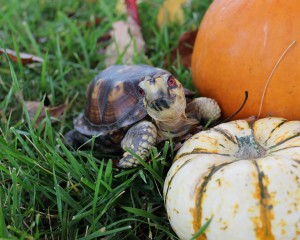 Meet “Mr. T”…well that’s what I call him around Winton Centre. We typically don’t name our Great Parks of Hamilton County animals, but when they come with a personality like this one does, well, you just can’t help yourself!

Our turtle in Winton Woods has been with us since 1993. He is definitely a Great Parks icon, even having his own fan club. We even have adults that saw him when they were children bringing their own children to visit him. He gets fan mail in the form of drawings or in a book that is kept in the auditorium especially for guests to sign for him. 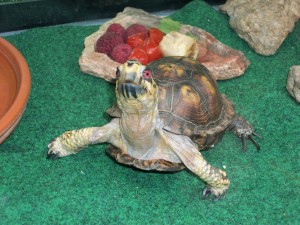 When he came to us years ago, he had been hand-raised and very much dependent on humans, which means he could not live in the wild again. He was also deformed, not by nature, but because he was taken out of his natural habitat at the age of six, kept in constant captivity and not fed a proper diet. He was fed only worms and never received fruits and vegetables like turtles need in order to grow properly. Calcium was mainly missing from his diet, so his shell stopped growing and his body did not.  His body is too big and he can no longer retract his head and legs within his shell, which exposes him, making him a perfect target, or should I say “meal,” for a predator in the wild.

We estimate that “Mr. T” is about 30 years old now and we are so glad to have him with us. However this past winter, we almost lost him. He became really sick from a wound on his leg. It became infected and spread throughout his body. He would not eat, he would not move his back leg and his body swelled to the point that his neck was being cut by his shell. We very much feared that we would lose him. But thankfully we did not, due to the dedicated time and effort of our Great Parks staff and animal care volunteers! He was receiving injections several times a week and soaked in an antibacterial bath. This past Monday was his last injection and he has made a full recovery!

“Mr. T” is a wonderful ambassador for the parks and anyone who meets him can never forget him. Box turtles can live to be 50 years or more, so we hope to have him around for many more years to come. Please stop by Winton Centre sometime and visit him… it may just become a family tradition!