Neither the forecast nor the weather could scare the fishermen away from the Bass Series tournament at Winton Woods Lake on Sunday, July 27. Despite forecasts calling for heavy rain and a possibility for strong thunderstorms, 24 teams still entered the tournament. The overcast and rainy conditions made the fish eat, and as a result made an unbelievable day at Winton Woods Lake. It was so good that every single team that entered in the tournament caught fish. Altogether, the bass anglers weighed in 181 pounds of largemouth bass. This is the most weight of any Great Parks bass tournament in recent history!

All three top teams caught their five-fish limit, and only ounces separated the teams. Brian Short and Mike Hoefker finished in third place with 11.74 pounds. 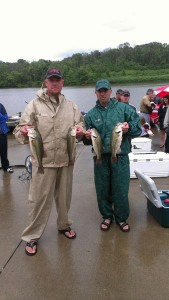 Shawn and Steve Gardner from Hamilton, Ohio, finished in second place with a total weight of 11.92 pounds. Steve Gardner also caught the biggest bass of the tournament, which weighed 4.09 pounds. 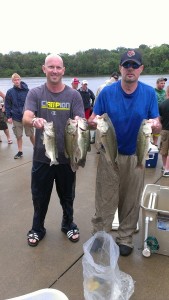 Clayton and Dan Hall won the bass tournament with 12.34 pounds. For winning the event, the Halls received $563 in prize certificate money. 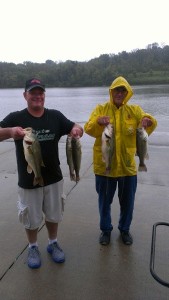 Congratulations to all the anglers for catching 181 pounds of bass!