The Pin is Mightier than the Club?

When watching your favorite professional golfer on the PGA tour, you’ll often hear the announcer on television say something like “He’s really getting aggressive and attacking the pin with that club!” If you didn’t know what they were referring to, one would think that a golfer was having anger management problems. And that certainly may be case for those ambitious weekend golfers struggling to play the game. However, for a golf professional, determining what club to use and how hard to swing it in order to “attack the pin” almost sounds barbaric. So what is a “pin” and why are they being attacked? 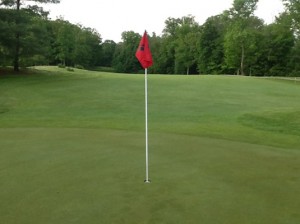 The pin is a synonym for the flagstick, which marks the location of the cup. When a golfer talks about pin placement, they’re referring to the location of the hole on the putting green. Often times the phrase “attacking the pin” is used when golfers take risks and try to go for the more complicated, unsafe shots to achieve the best possible score. Unfortunately, if not performed with precise accuracy or with a touch of good luck, these risks can often be disastrous, resulting in balls lost to water hazards, shots from behind trees and within bunkers or undesirable long puts.

As every golfer knows, it’s not as easy as it looks to make those shots seen on television. Why is that? Golf is a game of precision. The diameter of a golf ball can be no smaller than 1.68 inches. The diameter of a golf hole is 4.25 inches. This doesn’t leave much room for error, and it’s even more difficult when the pin is in the cup. The pin is 1/2-inch in diameter, which means there is less than 1/5 of an inch for a golf ball to narrowly squeeze between the edge of the cup and the pin in order to fall into the hole. That’s pretty tight! No wonder golf can be so frustrating! 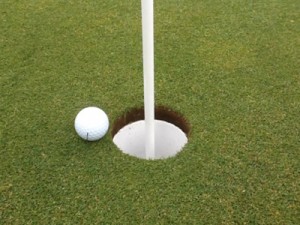 Ever wonder why golf course greens keepers change the location of the pin placement? Typically, during the golfing season the pin placement or hole location on the green surface is rotated every morning. This is done for a few reasons. Rotating the placement keeps the edges of the cup clean and crisp, so the golf ball can fit more easily into the hole. Secondly, it’s for the turf health. After many golfers play the same hole location in a day, the foot traffic in that area wears greatly on the turf. The soil becomes compacted, the leaf tissue of the turf becomes compressed and the wear and tear of golf shoes rubbing against the turf leaves it susceptible to fungal disease, moisture loss and heat stress. Not a good combination for greens keepers when they’re trying to keep the turf healthy! Lastly, by changing the pin locations, a golfer can play numerous times at the same golf course, but the golf course will never play the same twice. By changing the hole location a golfer must strategically change the way they play the hole. Is the pin in the front, center or back of the green? Is it left, middle or right? Is it near a bunker or in the upper or lower section of a two-tiered green? Many factors must be considered when playing a hole and knowing the pin placement helps the golfer decide how to play the approach shot and set up for the putt. 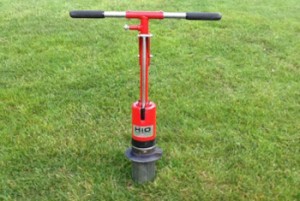 So how’s it done? Greens keepers use specific tools to change the pin placement. The cup cutter is a metal blade in the shape of a cylinder attached to a handle, and it is used to cut the hole into the putting green surface. The cup cutter is forced into the green surface 7 inches deep and forms a perfectly symmetrical hole when removed. The cup, which is 6 inches tall, is placed into the hole with a tool known as the cup setter. This tool sets the cup to its proper depth to where there is a 1-inch lip of green surface above the top of the cup. The pin is then placed into the cup and is ready for play. But what about the old hole location? A tool called the cup puller is used to pull out the old cup. Once this is done, the soil plug from the new cup is then ejected from the cup cutter into the old hole location. After mending the turf together and stepping down the turf/soil plug, the new pin placement is ready to be attacked for the day. 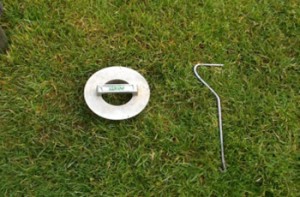 According to the USGA, there is no such thing as an “illegal” pin placement. There are no rules regarding hole locations as long as the pin placement is on the putting green surface. However, a greens keeper must evaluate many factors when selecting hole locations. The most important factor is a hole location that will give fair results and not tricky situations. Generally speaking, greens keepers will try to avoid placing the hole near sloped areas and the edge of the green by at least the length of the flag stick, which is commonly 7.5 feet in length. Greens keepers are trained to avoid these challenges and would much prefer golfers attacking the pin instead of them for cutting an unfair cup. 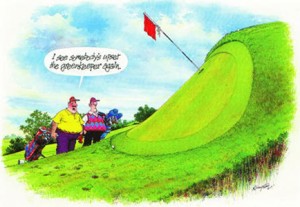 So now that you know all there is to know about pin placements, there’s still one question yet to be answered. Is the pin mightier than the club? I guess it depends on how you play. But it certainly can be conquered! 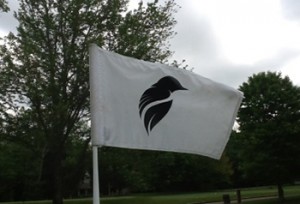