We had a great start with 25 teams attending our first Bass Series tournament at Miami Whitewater Forest Lake on May 10. There was thunder and lightning around Greater Cincinnati, but it never came near the lake during the tournament. Some of the anglers said “It was raining so hard, that it was even raining up from the lake!” Needless to say, all of the rowboats were extremely heavy after the tournament.

Most of the anglers who caught fish were using buzz baits in the morning. Others had success flipping creature baits around logs in the lake. Lewis and Larry Fillers won the tournament with five fish weighing almost eight pounds. Since we had such a large crowd, they received almost $600 in prize certificate money! 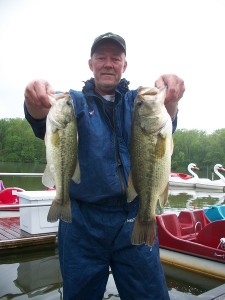 The second place team, Brent Jones and Ryan Zwick from Okeana, Ohio, caught three fish weighing 4.83 pounds. The also caught the largest bass of the tournament with a 2.87 pounder. They won $420 in prize certificate money and a $25 gift card from Bass Pro Shops. 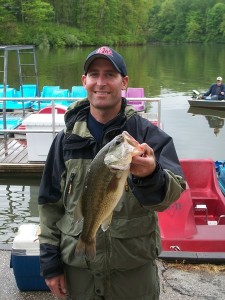 I want to send out huge thank you to all anglers that participated in the Bass Series tournament. I also would like to send a special thanks to Bass Pro Shops for sponsoring the Great Parks of Hamilton County’s Fishing Series. 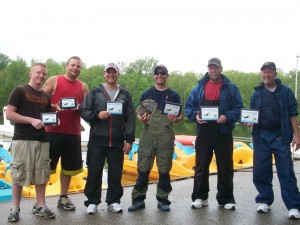 Our next tournament stop will be at Winton Woods Lake on June 8. Entry fees are $70 per team and includes boat rental. Sign up the morning of the tournament beginning at 6 a.m.