The Return of the Herons

As spring approaches, the return of the great blue herons begins. For the last few years, we have had the pleasure at Winton Woods of watching many great blue herons grow up. That’s because we have a unique thing here called a heron rookery, or heronry, where a large number of herons make their nests. Herons are picky about where they build their nests, so we’re lucky to be able to see so many in one place! 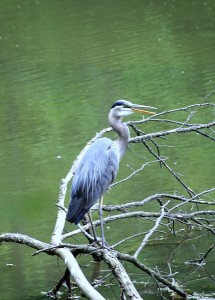 Great blue herons are a very majestic bird standing around 4 feet tall, weighing only 5–6 pounds with a 6-foot wingspan and flying speeds of up to 20–30 miles per hour. They are often given the nicknames of Pterodactyls, from the way they appear when in flight and their unique call. They can live to be about 20 years old, but the oldest banded heron found lived to be 24 years old.

Great blue herons can be found in both fresh and saltwater habitats. The herons nest in colonies up in the tree tops in numbers of up to 500 or more. Last year at Winton Woods, we had approximately 15–20 nesting pairs. Right now is a perfect time to come out and view them while there are no leaves on the trees and the birds are in nest-building mode.

The male herons collect most of the nest materials and present sticks to the females – if she accepts, then they become mates. The female heron weaves a platform and then collects moss, leaves, pine needles, dry grass and reeds to line the nest. Nest building can take anywhere from 3–14 days. The nests can be 20 inches or 4 feet across and 3.5 feet deep, depending on how many years they have been used. While the birds will mainly nest in trees, they will occasionally choose the ground, bushes, bird blinds or nest platforms instead. Once they find their spot, they tend to nest together (similar to an apartment complex), taking up multiple trees in one area. They often nest in groups to work together to keep an eye out for predators. 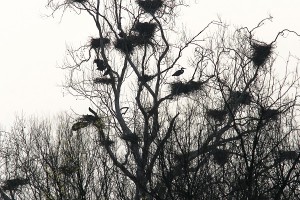 Pairs are mostly monogamous but select a new mate each year. During their courtship, females generally lay 2–6 eggs, and if they are unsuccessful they usually try again. Both male and female herons incubate and protect the eggs. Two months after hatching, the young will start to survive on their own.

Their diet consists of mostly fish, frogs, insects, mice, reptiles and even other birds. Herons are very patient hunters and stalk their prey, often using nuts and seeds to lure them in. In some cases, herons can choke to death trying to swallow something that is too large for their s-shaped necks.

Herons generally choose nesting locations within 2–4 miles of their feeding areas near lakes, ponds and swamps bordered with forests. They protect their feeding areas from other herons, humans and gulls by throwing out their wings and pointing their bills skyward. With their excellent eyesight, they can hunt by day and night.

Next time you are out at Winton Woods, I encourage you to take the West Branch trail. Look west across the lake near the Hawk Knoll Picnic Area and you just may see these beautiful birds and their nests! 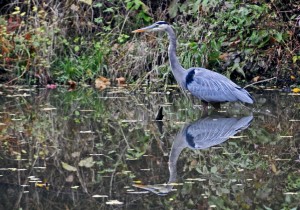