This is the time of year when turkeys are on many minds…and on many dinner plates. In the spirit of the season, let us revel in the tastiness of this bird and in some very impressive facts about them.

For instance, did you know that Benjamin Franklin was disappointed in our nation’s choice of the bald eagle as our country’s representative? According to Mr. Franklin, the bald eagle “is a bird of bad moral character” and the turkey is “a much more respectable bird.” 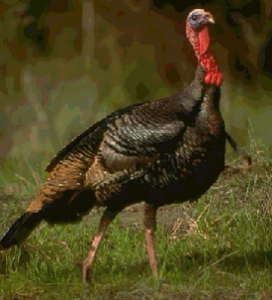 Most people are also surprised to learn that wild turkeys can fly. Wild turkeys have a lot of weight to get off the ground (the largest turkey was recorded at 37 pounds), so they like to begin their flight from a high spot, which allows gravity to do some of the work. Once they are in the air, though, they can fly up to 55 miles per hour! Their speed isn’t too shabby on the ground either, as they can run up to 25 miles per hour.

The wild turkey is such an intelligent, and even inquisitive bird, that hunters will often have to go to great lengths to lure in a big male, or tom, turkey. Decoys, box calls, camouflage and patience are a necessity for these hardy folks, as toms are not tricked easily. A male turkey can get spooked by a color on the hunter’s clothing or can be so interested in a female that it’s hard to lure him away.

Wild turkeys have made a grand come back. In the early 1900s, their kind was completely absent from Ohio due to over hunting and habitat loss. Conservation efforts, including hunting restrictions and efforts by Great Parks, have allowed this bird’s numbers to grow. Wild turkeys prefer a woodland habitat, with grasses nearby so they can dine upon their favorite foods, acorns, mushrooms and caterpillars. Preserved habitats in our Great Parks have provided wild turkeys with food, shelter and much-needed space, helping to increase their numbers and your chances of seeing one (or more). In fact, wild turkeys can often be seen just off of one of our park’s hiking trails. So, as you sit down to dine upon this large, fantastic bird, keep in mind how amazing this animal is ­– aside from just its taste.