What’s With the Lake?

If you’ve been to Sharon Woods lately, you may have noticed that the lake looks a little different than usual thanks to one of the smallest flowering plants in the world: duckweed. 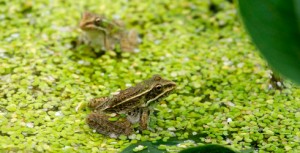 mna minor) is a very small floating aquatic plant that is often mistaken for algae. While it may look like one solid mass, it is actually made up of millions of individual plants consisting of little oval leafs called “fronds” with a simple “rootlet” that hangs down underneath. The fronds have a tendency to grab onto each other and form a thick mat that covers the water.

Over the last several years we’ve seen a huge increase in the occurrence of duckweed at Sharon Woods. The plant dominates where you have lots of nutrients like nitrogen and phosphorus being released from sediment in shallow water. The north end of Sharon Lake is much shallower and more sluggish than the rest of the lake, which makes for a perfect nursery for duckweed.

While duckweed does provide food and habitat for wetland wildlife, it is not the most appealing-looking plant. It’s also not the easiest plant to control, since it can double its biomass in four days during the growing season. The good news, though, is that duckweed will begin to grow dormant as temperatures cool, so we shouldn’t see it for much longer!