Does the End of Summer Have You Seeing Red?

While preparing for another season of removing invasive Amur honeysuckle, I have seen some pretty interesting things throughout our Great Parks. Recently, while scouting at Woodland Mound, I couldn’t help but notice the color red.

As I approached the wetland area north of Chipmunk Shelter, a bright red cardinal flower (Lobelia Cardinalis) caught my eye. Having seen this plant before at the Shaker Trace Nursery, I was already familiar with this tall Ohio native wildflower. It prefers wet soils such as damp woods, swamps, stream banks, and wetlands. It can grow to around four feet tall and has an erect raceme of bright red flowers. 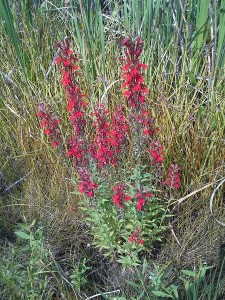 I continued onward only to have another flash of red catch my eye. I looked over to see a bright red dragonfly known as a meadowhawk. Dragonflies are often called mosquito hawks because of the way they scoop up other flying insects (like mosquitos) in their legs and eat them while in flight. Dragonflies are prominent in the hot summer months of July through September. Since their nymphs (insect larva) emerge from water, seeing this insect near the small wetland was fitting. 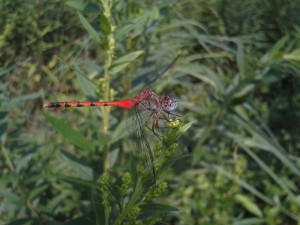 As the seasons change, fall will bring with it its own red hues. Anthocyanins are pigments produced by leaves in the fall that give tree canopies that familiar autumn red. Northern cardinals will stand out a little more as the leaves fall from the trees. I will also be keeping my eyes peeled for red-backed salamanders and cinnabar-red polypore fungus (both of which have been spotted previous years around Trillium Trails at Glenwood Gardens).

What kind of colors does the end of summer have you seeing?