Jewelweed: A Not So Hidden Gem

You have probably seen this native flower in bloom recently throughout our Great Parks, and may know it by many names. Commonly called spotted jewelweed, orange jewelweed, orange balsam or spotted touch-me-not (Impatiens capensis), there is also a yellow variety (Impatiens pallida) that is referred to as pale jewelweed, yellow jewelweed or pale touch-me-not. The name touch-me-not comes from the ripe seed pod that pops when touched or lightly squeezed. Others think that the leaves create a jewel-like appearance when held under water or that the orange flower glows in the sunlight like a jewel — hence the name jewelweed. 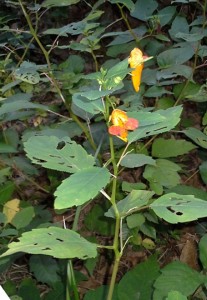 Native to North America, jewelweed thrives in our area because of its preference for wet, shady, limestone-rich soils. These summer-to-fall bloomers have an approximately 1-inch horn or cone-shaped irregular flowers with a short curved spur in the back. The plant grows about 2–5 feet tall with coarsely toothed oval or egg-shaped leaves. Hummingbirds and bees are major pollinators of jewelweed, and deer enjoy foraging it.

The plant’s succulent and somewhat translucent stem contains a sticky, mucilaginous sap. This sap contains a component called lawsone, which has antihistamine and anti-inflammatory properties. Said to alleviate skin irritations due to poison ivy, stinging nettle, bug bites and other various plant and insect-related rashes, jewelweed sap was often used by Native Americans indigenous to Appalachia. Ironically enough, it can often be seen growing amongst poison ivy!

Today, jewelweed extract is still used in commercial poison ivy soaps, lotions and topical sprays, as well as treatment for athlete’s foot. It is a common folk remedy for bruises, sores, warts and ringworm. Many parts of Asia also use jewelweed in various remedies to help with ailments such as blood flow, post childbirth pains and fish poisoning.

So the next time you see jewelweed, or any other of our more common plant species, stop to appreciate how uncommon some of their properties can be!