Last Chance to Bass Fish
The next Bass Series tournament will be held at Winton Woods Lake on August 10, starting at 7 a.m. Registration begins an hour before the start of the tournament. This is the last open bass tournament of the year. The top 20 anglers in the Bass Series qualifying events will be invited to fish at Winton Woods for a $1000 shopping spree to Bass Pro Shops. 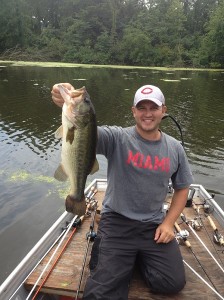