Beauty is indeed in the eye of the beholder. By definition, a weed is a plant that is not valued where it is growing. Chicory is commonly called a weed by many people, while others regard it as beautiful and useful. It has a rich history and is widely used today for many things. This non-native perennial thrives along roadsides and can be seen throughout our Great Parks. The photo below was taken at Glenwood Gardens. 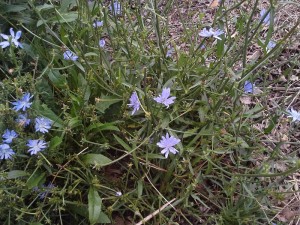 Chicory (Cichorium intybus) is known by many names including blue sailors, ragged sailors, coffeeweed, wild endive, bunk and horseweed. Physical characteristics include blue flowers (occasionally ranging from white to pink) that bloom in summer and fall, leaves that vary from toothed to entire, and it is about 1–4 feet tall on average. Each flower lasts only one day and flowers tend to open and close around the same time each day.

Use of chicory goes back thousands of years, and it was one of the earliest plants in recorded history. The second half of its Latin name, intybus, comes from the Egyptian word for January — the time that it was harvested and consumed. Horace, the famous Roman poet, even made reference to chicory as a part of his diet. Many ancient German texts tell of chicory being used for everyday ailments and according to some European folklore, it was believed to help open locked doors. By the 1700s, factories in Brunswick were manufacturing large amounts of chicory to use as a coffee substitute. Confederate soldiers used chicory as a coffee substitute during the Civil War and the United Kingdom has commercially sold it since the 1800s.

The plant’s root is the part that is roasted and ground to be used as a coffee substitute or additive. Some brewers even use roasted chicory to help flavor ales and stouts. The leaves are edible and somewhat bitter. Chicory contains volatile oils that are known to help eliminate intestinal worms, so it is preferred as forage for horses and livestock in many areas across the world.

So the next time you see a common wildflower like chicory, remember that what is a weed to some is very useful to others.