The final Bass Series tournament of 2013 was held at Winton Woods Lake on Saturday August 10. With some heavy mid-week rain, the lake was high and only a few inches below the edge of the dock. We had perfect water color, hot and humid weather and a cloudy sky. Those factors resulted in one of our best tournaments of the year.

The winners of the tournament were Brent Jones and Ryan Wick of Oceana, Ohio, with a five bass limit that totaled 14.8 pounds. They said that they caught nearly 20 keepers throughout the day, and most of their fish were caught on crankbaits. They won $357 in prize certificates and really nice plaques. 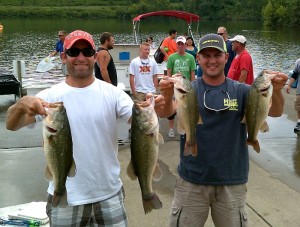 Second place was claimed by Andy McCray and Matt Eggenberger, who caught an 11.24 pound limit. They won $255 in prize certificates and plaques. The father/son team of Steve and Matt Wheeler finished third with 10.8 pounds. They also had the biggest fish of the day: a 4.36 pound bass. They won $153 in prize certificates, plaques and a $25 Bass Pro Shops gift card for catch the big bass.

There was a three-way tie for Angler of the Year going into the final event. The team of Jamie Rains and Craig Stephany finished seventh on Saturday with 7.93 pounds and in doing so finished on the top of the point standings with 161 points. Jamie and Craig are the 2013 Co-Anglers of the Year! 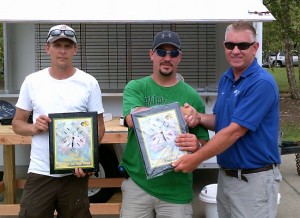 The top 20 anglers in the final point standings qualify for the Bass Series Championship at Winton Woods Lake on September 28. The winning team at that event will take home a $1,000 Bass Pro Shops shopping spree.

Get in on the great fishing at Winton Woods Lake while it lasts. The Winton Lake Championship tournament is this Saturday, August 17, from 7 a.m.–1 p.m. Any type of fish can be weighed in at the event. The entry fee is $60 per team and includes boat rental. Registration begins an hour before the tournament.