We’ve written briefly about butterfly weed (Asclepias tuberosa) before, but this is a plant that really gets a second look.

As an ornamental, it’s exceptionally gorgeous with brilliant orange blooms that last for much of June and July. It’s also far from fussy and will thrive in hot, dry, nutrient-poor sandy soils. As its Latin name suggests, butterfly weed makes a large tuber to store nutrients and water through tough times like droughts, which is partly why it does so well in rough conditions. If you’re looking to attract wildlife to your backyard, butterfly weed will attract butterflies and serve as a host plant for native caterpillars as well.

What else makes butterfly weed so interesting? It was also one of the most widely used medicinal plants of the indigenous peoples that inhabited the central United States. Butterfly weed was used to treat a wide range of lung ailments, including bronchitis, influenza and pleurisy (a swelling of the lining of the lungs). In fact, it was used so extensively to treat these lung ailments that it earned the name of “pleurisy root.” It was also used as an expectorant to help in coughing up mucus and to treat muscle spasms. The alkaloids responsible these effects are very powerful and, without a lifetime of training and experience, can easily cause harm. Before pharmacies, people had to use what was around them to treat disease, but even today the vast majority of medicinal drugs in production are derived from a plant. 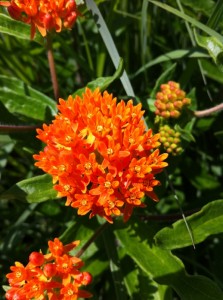