The Fungus Among Us

When you begin studying biology you usually begin with plants and animals, and maybe some microbes like plankton and protozoa. Then, one day, you may find yourself learning about mushrooms and realize that with fungi everything you thought you knew about how things are “supposed” to work is turned upside down. 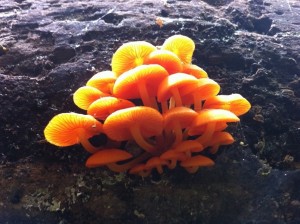 The majority of the orange mycena’s life is spent as an interwoven, root-like network called mycelium. The mycelium is itself made up of microscopic thread-like structures called hyphae, and these hyphae work their way in, around and through logs, leaf litter and just about anything else you can imagine. In the process, the fungus releases a whole host of chemicals. Some of these aid in breaking down and absorbing nutrients; others inhibit or kill other fungi and bacteria; and some help in attracting other fungi for sexual reproduction (which can be tricky, as some species of fungi can have upwards of 25 different “sexes”).

What we see as mushrooms, also called fruiting bodies, form from the mycelium. In a process that is still not fully understood, the thread-like mycelium organizes itself into a mushroom, which will then ripen and begin releasing spores that function similarly to a plant’s seed.

This is a very quick run-down of fungi, but one thing is for certain: they are an amazingly weird and wonderful life form. They aren’t as well studied as they should be, but if you’re considering a career in science, then maybe you should think about working with this fascinating group.