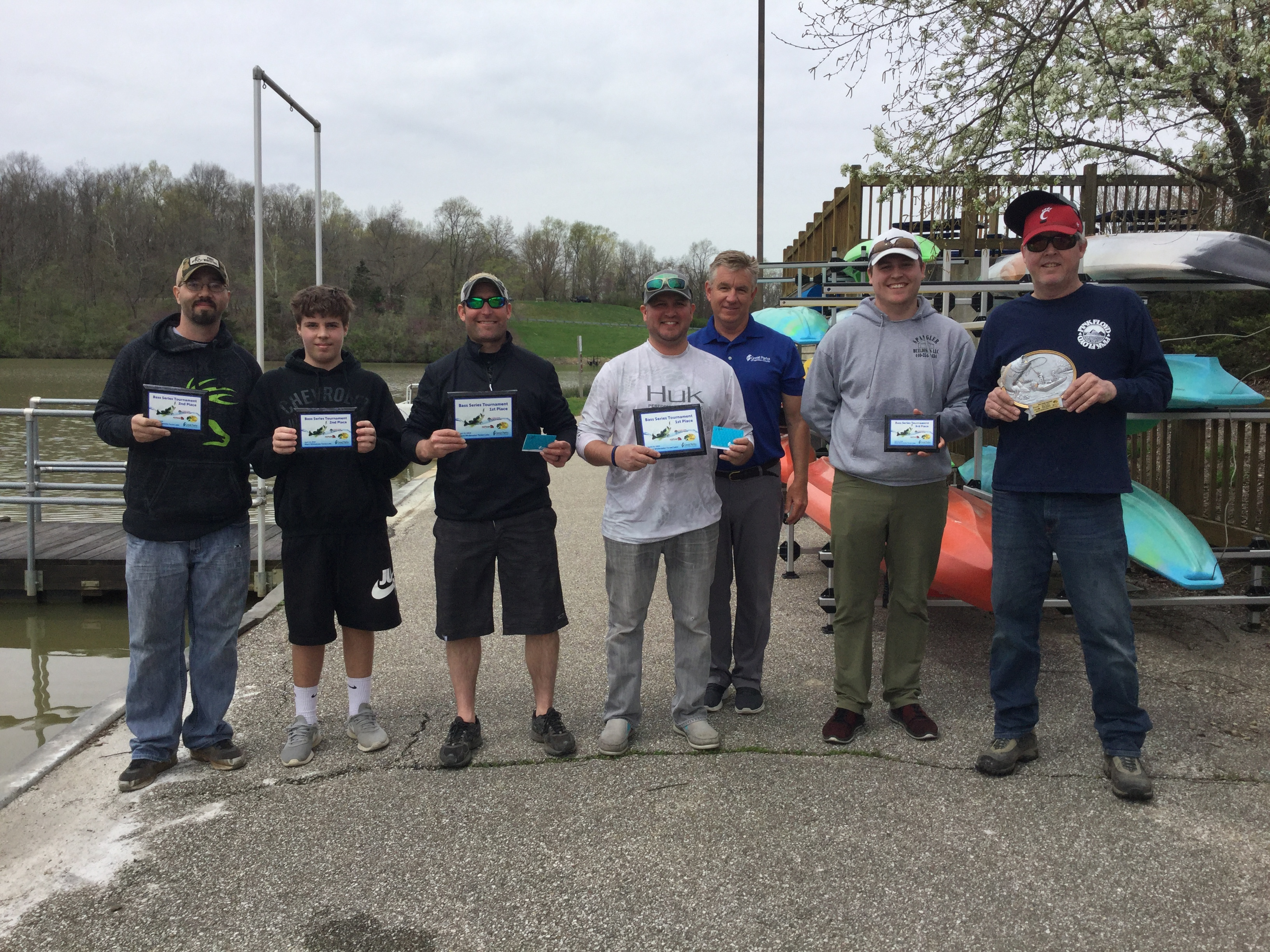 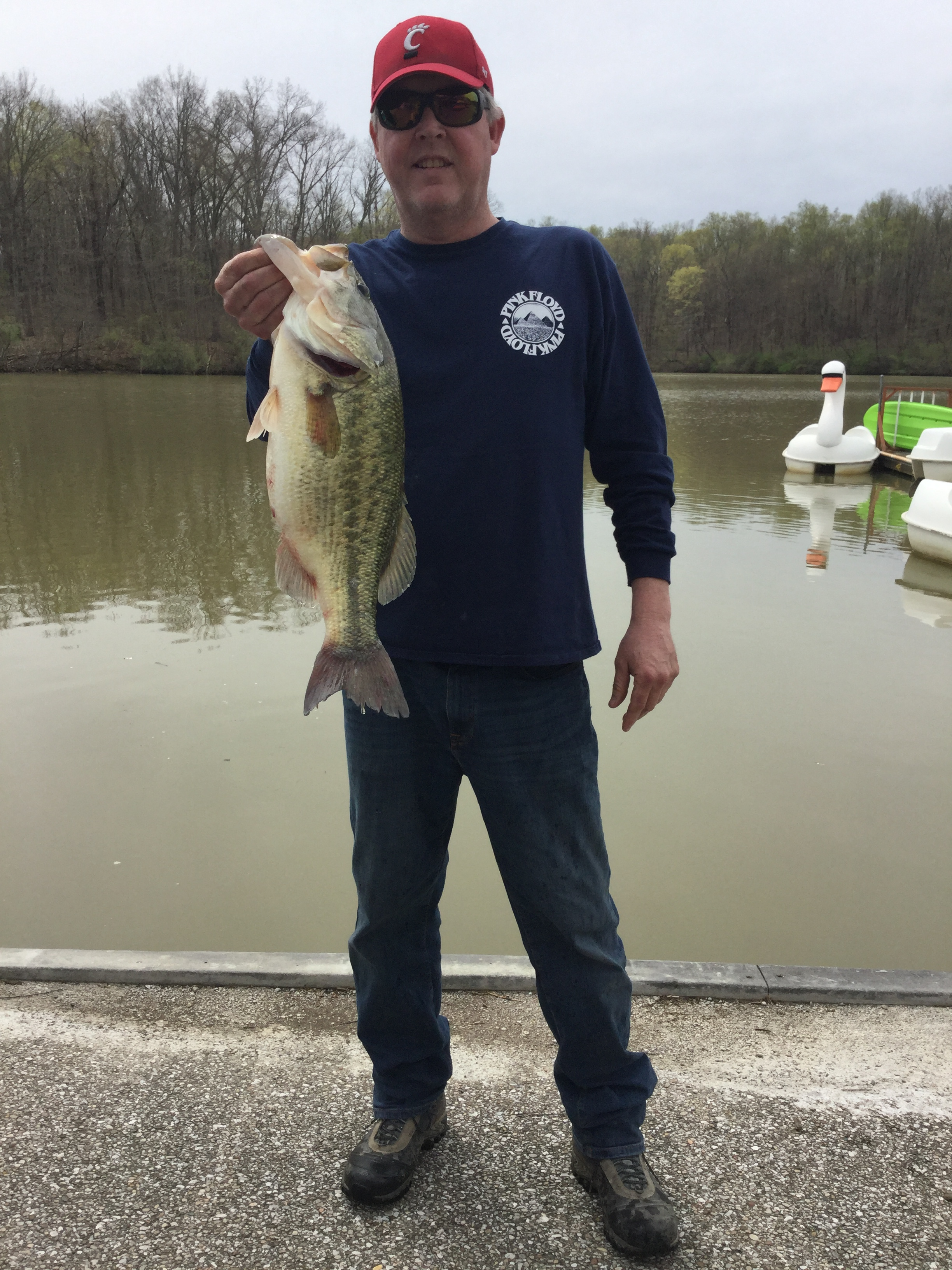 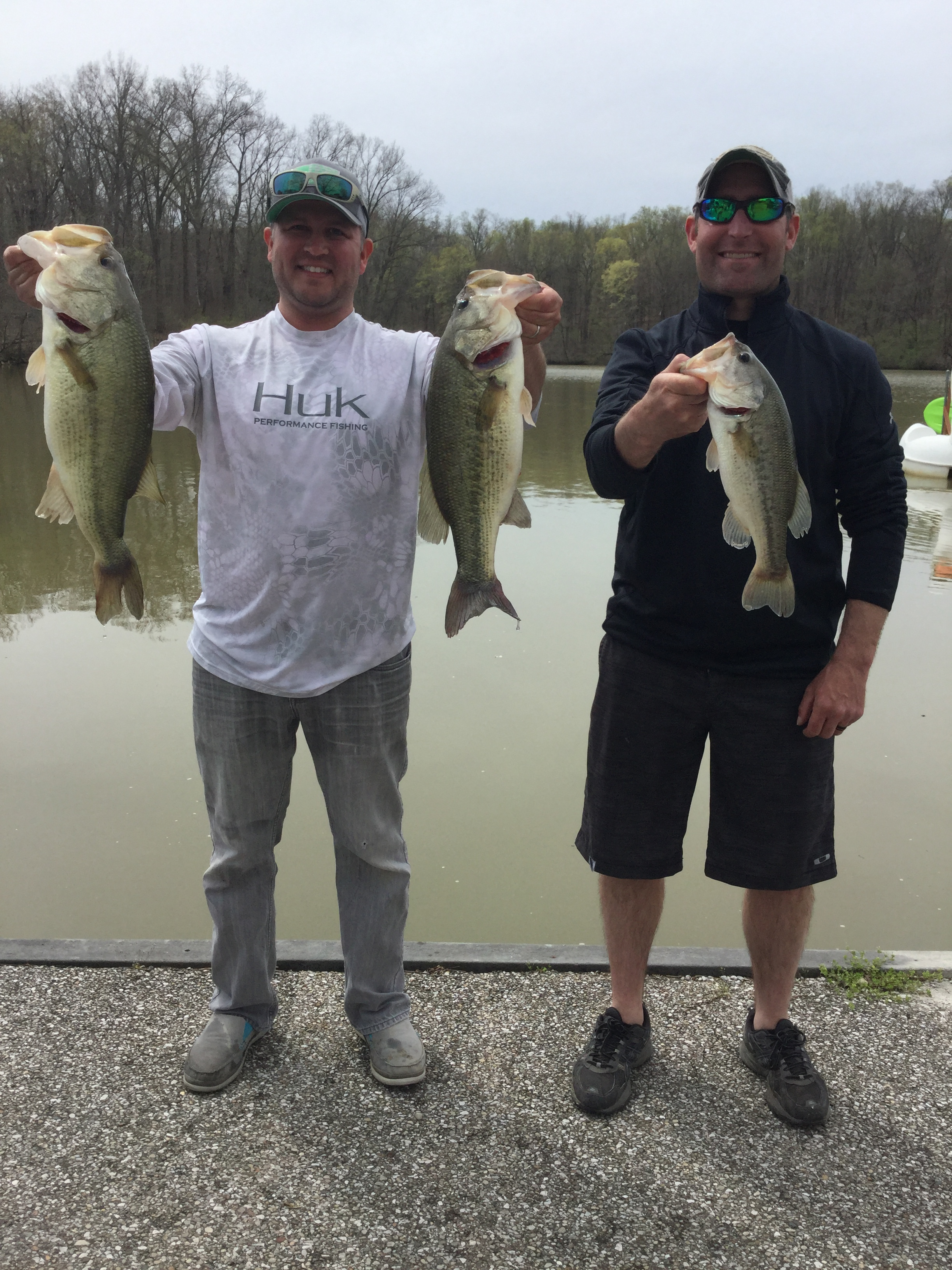 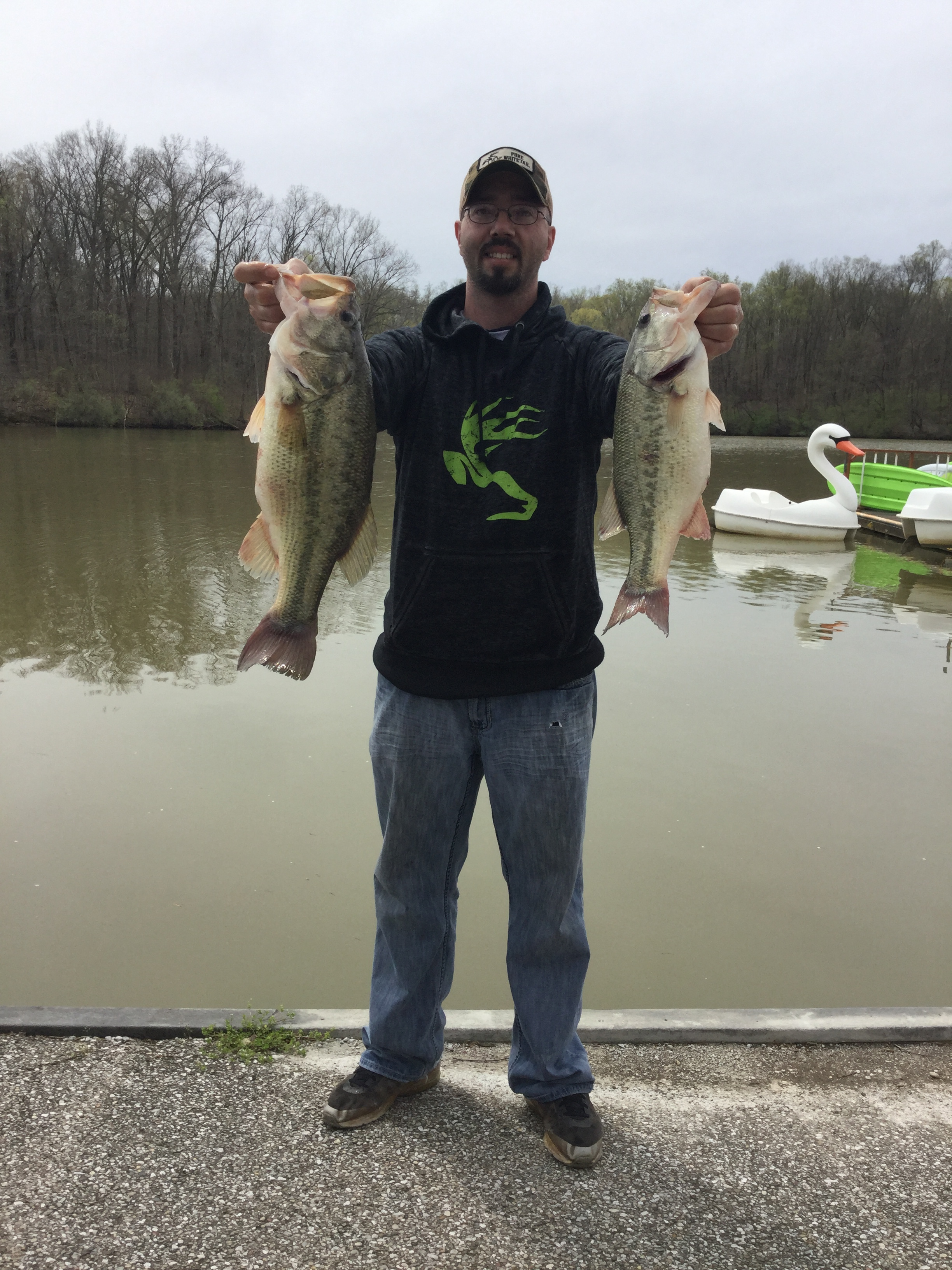 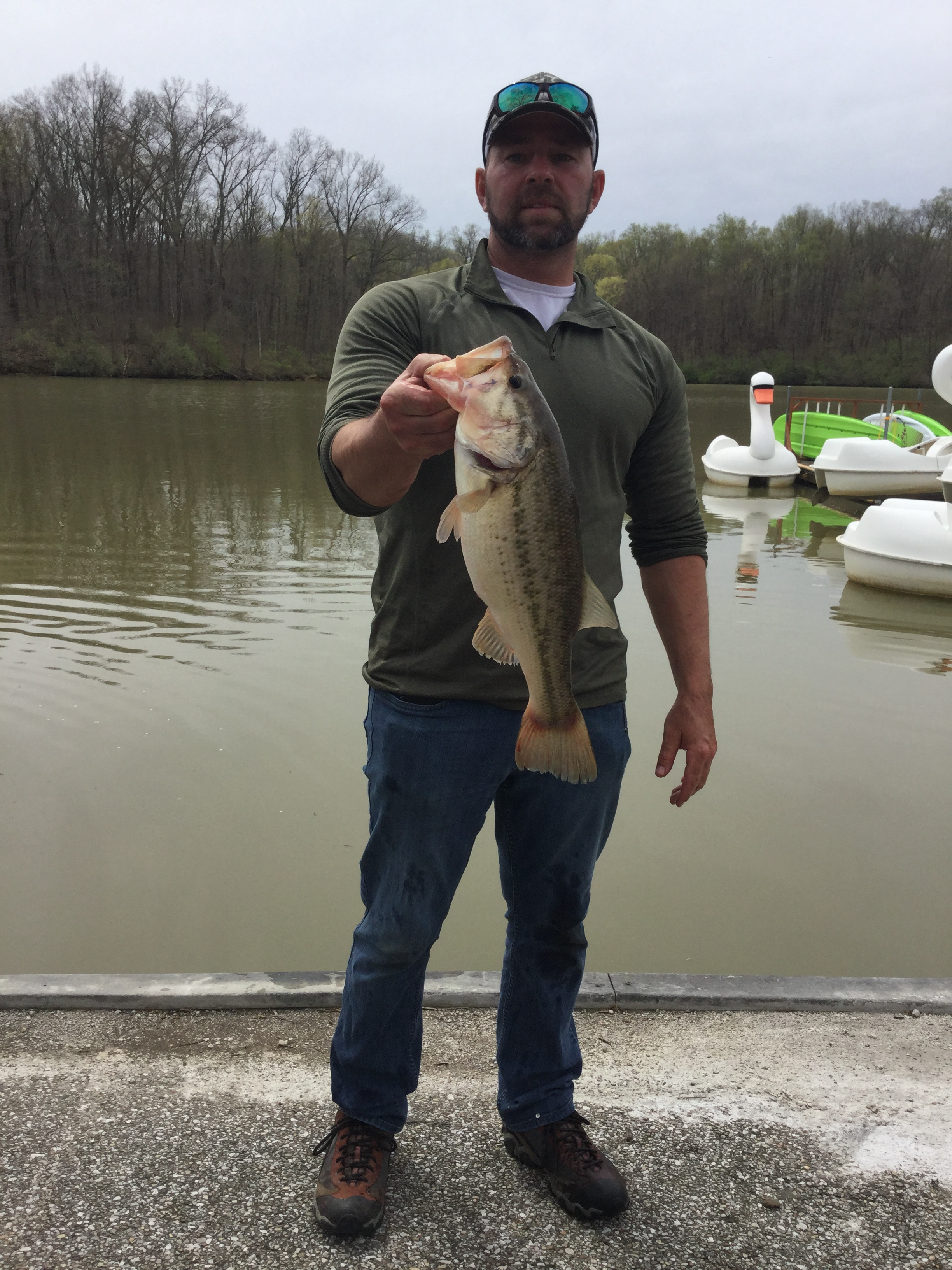 The 2019 Great Parks Bass Series tournament circuit kicked off at Miami Whitewater Forest Lake on April 13. A chilly morning gave way to a beautiful sunny afternoon for 34 teams who were eager to test their skills on a lake notorious for big fish. That reputation continued to grow as we saw big fish after big fish brought to the scales. By the time a winner was crowned, we had weighed seven bass that were more four pounds each.

Although southwest Ohio had a few very warm days in the week leading to the tournament, the water was still in the low 50s. Anglers knew that bites would be few. However, with a full moon approaching on April 19, they also knew that a wave of big females would be moving to shallow waters in preparation of spawning. They fished for a five-bass limit. We did not weigh in a limit, but we did see heavy weights on the scales.

Brent Jones and Ryan Zwick of Okeana, Ohio won the tournament with three bass totaling 11.55 lbs.  Their bag was anchored by a big 5.23-lbs. bass. They won plaques and $808.50 in Great Parks gift cards. They focused on shallow, off-shore structure with blade baits for their success.

On a day that many big fish were caught, Cody Kreager and Terry Blankenship of Loveland, Ohio would top them all with a 6.44 lbs. giant! They won the big fish jackpot, and prizes from Hamilton Bait & Tackle and Wieda’s Marine.

A big thank-you to all of the anglers who took great care of the bass. Every fish was released alive so that future anglers have a chance to experience the excitement of catching a trophy fish. All Great Parks lakes are catch-and-release-only for bass.

The next Bass Series Tournament will be at Winton Woods Lake on May 5. Entry fees are $70 per team, including boat rental.

I hope to see you there!