December is the most wonderful time of the year. The holidays are almost here, putting people in high spirits … especially for National Llama Day! Never heard of this holiday? No prob-llama! The Great Parks marketing team ventured over to Parky’s Farm to learn more about these fuzzy camelids. 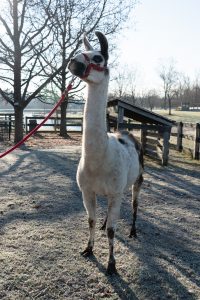 Yoshi is the sole llama (Lama glama) at Parky’s Farm. She stands tall among her alpaca (Vicugna pacos) friends and is the only female camelid at the farm. While llamas and alpacas are both members of the Camelidae family, they do belong in different genera and species classifications.

Assistant Farm Manager, Moey Baback, shared with us what Yoshi is most excited about for National Llama Day and what Yoshi’s daily routine is like.

At 22 years old, Yoshi is more experienced than the typical llama. The average lifespan for these camelids is in the teens. So not only is Yoshi set into her routine, she is the reigning ruler at Parky’s Farm. (In fact, while she posed for photos, her alpaca friends could be heard humming from across the farm, curious as to where their matriarch went.) 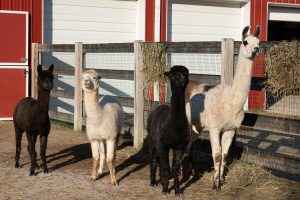 From left to right: Hershey, Bentley, Rudy and Yoshi eagerly await some hay.

Sometimes mistaken as ruminants (animals that have four stomach compartments), llamas only have three stomach compartments. Instead of a fourth stomach compartment, llamas have a complex and extremely long colon. Like other camelids, this complex digestive system allows llamas to consume high-cellulose foods, such as grass and corn. In addition to the traditional llama diet, Yoshi enjoys the occasional treat. Hay and alfalfa cubes are her favorite treats, says Baback.

When she’s not enjoying the occasional alfalfa cube, Yoshi enjoys taking long naps in the fields and listening to Beyoncé. Perhaps it’s because she’s a huge pop music fan, or because she’s the only female, but Baback shares Yoshi’s favorite song is “Single Ladies.” 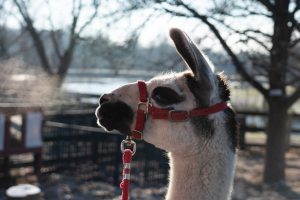 Yoshi may not be the biggest fan of the cold, but she is ready to be adored this National Llama Day.

When Yoshi isn’t napping in the field or attending a pop concert, she can be spotted basking in the sun at the farm or hanging out with the chickens and alpacas. She is the majestic unicorn – the queen – of Parky’s Farm, says Baback.

As the farm’s resident llama whisperer, Baback shares some of Yoshi’s favorite things with us in order to better celebrate National Llama Day.

Next time you stop by Parky’s Farm, be sure to say hi to Yoshi! Not sure how to tell her apart from her alpaca cousins? Not only are llamas taller than alpacas (roughly 10 inches on average), llamas have banana-shaped ears. Keep your eyes peeled for this difference!