Evidence of flint knapping from an Early Neolithic house. [Photo by Wessex Archaeology on Flickr]

On a recent Sunday afternoon under a cloudy November sky, I joined some fellow naturalists for my first lesson in flint knapping. In its simplest terms, flint knapping is making arrowheads and spear tips from stone. Stone is broken away by percussion and pressure flaking, which were two terms new to me.

Adam, the instructor, outfitted us expertly with modern supplies. I really hadn’t thought much about the tools and preparation needed and was surprised by a few things. Safety is very important, so safety glasses, heavy leather gloves, pieces of leather to put on your lap and a tarp to capture the flakes were all incorporated in the process. A “bopper,” basically a short wooden handled tool with a copper rounded tip, and a pressure flaker, another wooden-handled tool with a pointed copper tip, was used. The ancients would have probably used tools of stone or animal antlers, which would have been available to them from the surrounding natural environment. 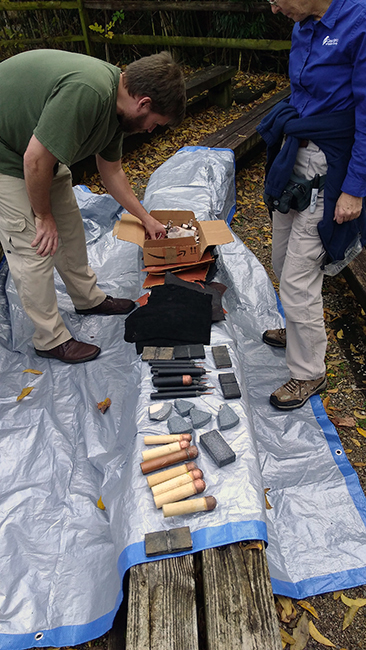 Susan looks on while Adam prepares the flint knapping supplies

As I positioned my hands with the percussion tool to make my first strike at the stone I felt excited and a bit overwhelmed by the task at hand. The stone I was using was Kentucky Hornstone, which is a type of chert. Stones often used would be chert, flint or obsidian (volcanic black glass). My goal at first was to remove as much of the white covering or cortex to get to the more pure chert. So with amateur blows, I hit the stone and occasionally caused a piece to flake off. 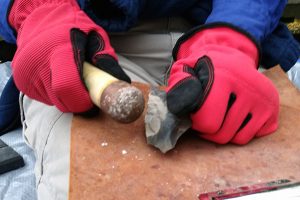 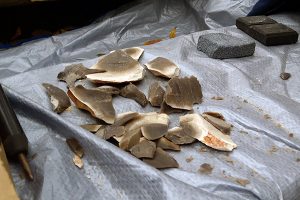 I relied heavily on Adam to advise me about where to strike. His patience and encouragement spurred me on. I felt pleased when a large chunk would crack off. More often than not nothing came and occasionally I would miss the mark and hit my leg as I cradled the stone. (I wondered if our ancestors were all banged and bruised when they first learned.) It was clear to me that I would need many more hours, and after some time I became tired. Although no arrow head was accomplished that day, my experience genuinely gave me a greater appreciation for this painstaking process and masterful art. I was grateful to my fellow naturalist who shared his collective knowledge and helped me connect with people of long ago.