The first Great Parks Bass Series tournament of 2017 was held at Miami Whitewater Forest on Saturday, April 22. There were 68 anglers with game plans and gear ready who showed up with hopes of kicking their season off with a win, but the weather did not cooperate. A cold north wind kept temperatures in the low 50’s all day, which slowed the action after a week of beautiful 70 degree days.

By the end of the six-hour tournament, 18 different teams brought fish to the scales. Alex Willwerth caught the biggest bass of the day, which tipped the scales at 7.04 pounds! He and partner Craig Stephany had three more keepers to go with it for a total of 12.62 pounds. It was enough to earn them second place, trophies, $577.50 in Great Parks’ gift cards and a gift card to Hamilton Bait & Tackle.

Brent Jones and Corey Robinson caught four keepers for a total weight of 10.06 pounds to secure third place. They were awarded trophies and $346.50 in Great Parks’ gift cards.

In the end, the day belonged to Mike and Mark Toht. They culled a five-fish limit that totaled 17.75 pounds. Their biggest fish weighed 4.52 pounds. They won trophies and $808.50 in Great Parks’ gift cards. 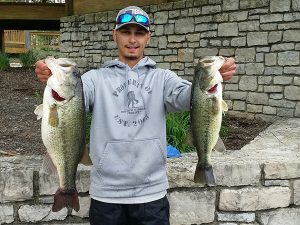 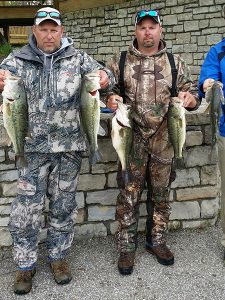 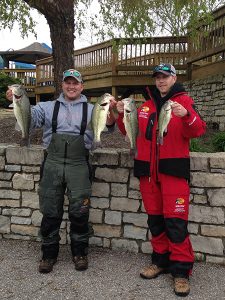 Water temperature at Miami Whitewater Forest Lake is currently 72 degrees, and anglers encountered bass on spawning beds. This is a little earlier than usual, so the result is fish that are hard to catch. Congratulations to Mark and Mike for unlocking the key to a great bag of fish!