Recently, a call came into the naturalist desk at Winton Woods inquiring about the identification of an injured bird. I took the call and had the woman on the phone describe the bird as best she could. She told me that it was small and brown with a long beak and a white stripe. I thought it might be a Carolina wren but suggested she take a picture and email it. I opened the photos, and I was surprised to see a bright-eyed woodcock carefully cradled in her hands! 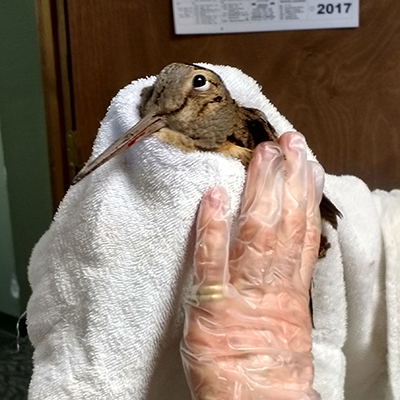 This early spring migrant (sometimes called a timberdoodle) delights the observer with a very unusual courting display complete with cartoon-like vocalization and high-flying antics, which are all done just to woo the female. The bird this woman found looked very alert and, except for a small amount of blood, perhaps a viable candidate for some expert assistance and a second chance at freedom.

I put the woman in touch with one of our local rehabbers at Second Chance Wildlife. The next thing I knew another email arrived relaying that the bird was set free after some recommendations from the rehabber. What an exciting afternoon! The rescue and release was a win-win for everyone.

I imagine that by now the bird may have returned to a nesting site in a grassy field. Interestingly, woodcocks are in the category of shorebirds and ground nesters in their spring homes. Laying eggs in a ground nest is tricky business, and it is a good thing they are well camouflaged against animal predators and human intruders. 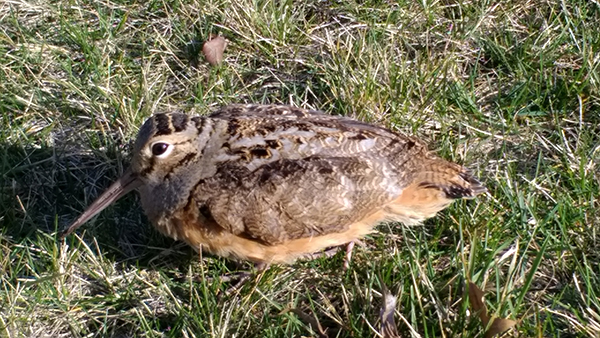 Don’t miss the opportunity to catch these humorous aerial acrobats this spring. Woodcocks are just getting started, with their seasonal show coming soon to a park or field near you.