As I bundled up for the cold blast of air descending upon us this week, my thoughts wandered to a most remarkable feathered friend, the golden-crowned kinglet. Only slightly larger than a hummingbird, it weighs in at one-fifth of an ounce (or two pennies), and it is a common winter visitor to Ohio. Some overwinter as far north as Nova Scotia and even Alaska. Aside from its incredible down feather insulation, the secret of the kinglets’ nighttime survival is still somewhat of a mystery.

To spot a kinglet along the trail, listen for the thin, extremely high-pitched, ascending “tsee tsee tsee” notes, often ending in a musical warble. You might also see the frenetic movement of the tiny bird. Its very survival depends on a constant all-you-can-eat buffet of dormant insects in a variety of life stages. From dawn to dusk, it must forage to gain enough reserves to survive the night. 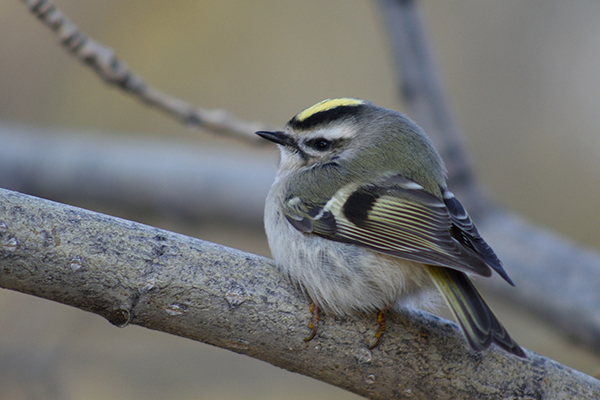 In the northern part of its range it endures short days with heavy snow and cold temperatures often plummeting to – 30 degrees. To survive these conditions, it seeks out conifers that provide food and shelter, and two or more birds have been observed huddling on a branch. It’s possible that the kinglet goes into a state of torpor, dropping its temperature from the typical 110 degrees, to help reduce heat loss and extend its temporary food reserves.

For those kinglets that do survive the winter, two broods of 8 to 11 eggs will be laid in the spring. Most song birds lay 3 to 5 eggs, but the kinglet is taking no chances on the survival of its species.