Have you ever heard of lawn bowling? I hadn’t either until I started working at Little Miami Golf Center. Lawn bowling has roots as far back as 3,000 to 4,000 years ago. The Romans introduced the game to Europe, and in 1209 the Southampton Old Bowling Green Club was established in England. In 1864 a man by the name of William Mitchell published a manual called the “Manual of Bowls Playing.” Following this print, in 1894 the Scottish bowling clubs became the basis of the rule holders of the modern game that is played today. The National Bowling Associations were established in the late 1800s. Today the sport is played in over 40 countries with more than 50 member national authorities. 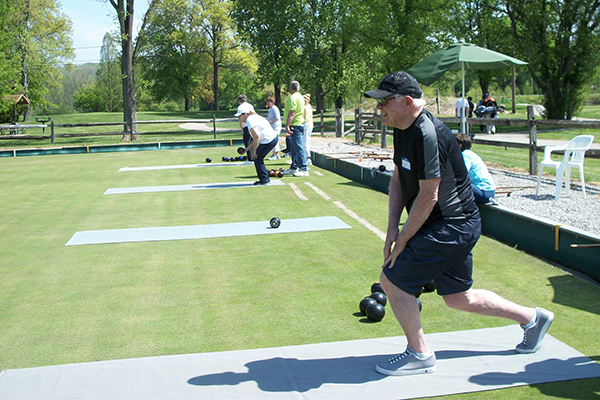 In the US, lawn bowling is usually played on a large, leveled rectangle of manicured turf grass. This surface is known as the bowling green. Some of the more modern bowling greens have gone to a synthetic surface, and they can come in all shapes and sizes depending on where you are playing throughout the world. Some are fast, some are slow and some even have a crown in the center apex of the bowling green.

The bowling green is divided into parallel playing strips called rinks. To start a game, you first place the mat along the edge of bowling green. The mat is where you stand as you bowl. Then you roll a small white ball, called a “jack” or “kitty,” to the other end of the green, approximately 100 feet away, to serve as a target. Once the jack comes to a rest and is aligned to the center of the rink, the players then take turns rolling the bowls from the mat towards the jack. The person who rolls his/her bowl closest to the jack scores a point. Usually the winner in a singles game would be the first player to score 21 points.

The bowls that are rolled towards the jack are designed to travel a curved path because of the weight (bias) of these oddly-shaped balls. The range of diameter in the bowls is 11.6–13.1 cm and around 3–3.5 lbs. Most people choose the bowls on preference or the one that suits them the best, much like a baseball player chooses a glove or a golfer chooses his or her clubs! The bowls used to be made of a dense wood material, but now are typically made of a hard plastic composite material and are available in a variety of colors. Similarly to the way some golfers will mark their balls, most people will mark their bowls with color, adhesive stickers or labels to avoid confusion when playing against their opponents.

When bowling, there are several types of deliveries that a player can use. The first of these is called a forehand draw. For a right-handed player, they start the bowl out to the right of the jack and it would curve to the left back to it. The other shot that players use is called a backhand draw, which moves the bowl the opposite direction so that it curves from left to right and head towards the jack. The third shot that players use is called a drive or a strike. 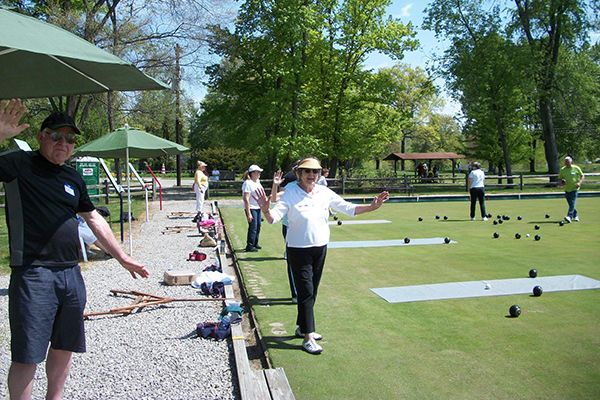 The local lawn bowling club here in Cincinnati is called the Cincinnati Lawn Bowling Club. They bowl about 75 days a year, May through October, on the beautiful natural bent grass bowling green located at our very own Little Miami Golf Center. The CLBC has been in existence since 1922, and original members bowled in the inner green of the horse racing track in Oakley. After the track was demolished, the club moved to a green near Xavier University where they bowled for many years. In 1997, Great Parks installed a bowling green at Little Miami Golf Center. On May 25, 2004, the Great Parks Board dedicated the green, renaming it “The Judge Wayne F. Wilke Lawn Bowling Green” in honor of our longtime supporter and friend.