As soon as the click of the key turning in the lock gives me away, I can already hear the repetitive chirp coming from behind the building in the outdoor compound. This is how Missy, one of our red-tailed hawk educational ambassadors, greets me every morning. During my nearly 20 years with Great Parks, I’ve had the privilege of working with Missy longer than any other coworker. 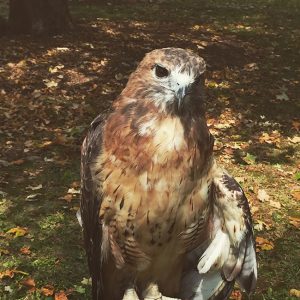 Today is special, because this is the anniversary of her arrival to Farbach-Werner Nature Preserve. All of our birds of prey have come to us as a result of their fast-paced lifestyle, having suffered an injury that would make it extremely difficult or impossible to survive in the wild. Missy sustained a wing injury so flying, and as a consequence, effective hunting, is no longer an option for her. She came to us 30 years ago with adult plumage, meaning she was at least already a couple years old. The typical lifespan of a hawk is about 20 years in the wild, if it gets past those first couple of skill-developing years.

Being in captivity would probably not be her first choice, but she seems to make the most of it, playing pranks such as carefully watching unsuspecting caregivers walk through, then bolting toward them, stopping just shy of her “target.” But the “wild” will never be removed from this bird. Even though she has spent a great deal of time with people, she keeps you on your toes and demonstrates her natural tendencies by the occasional attempt to snatch her meal from you, protectively mantling over it (even though I’ve repeatedly reassured her I want no part of her prized rat) and giving a nice powerful squeeze to her leather-gloved handler if she is displeased with a situation.

Today she regally sits on her perch, carefully watching me (fittingly, like a hawk) while I walk into each enclosure to check on all the other birds. I always stop and talk to her as I’m tidying up her space. Although my colleagues and I never regard her as a pet, we do get to know each bird and its individual personalities and quirks, as that helps us form a strong working relationship. Finishing up my work in the compound and heading out, I wish her a good day. She answers goodbye with her own standard shout, which is just slightly different than her “hello”.